My second Day in Delhi was quite an exhausting affair, but considering the sightseeing I did, it really wasn’t an issue. The new age taxi services, Uber and Ola, turned out to be huge boon, because, as I would learn with experience, Delhi transport happens to be quite expensive for tourists. Kaavash had strictly instructed me not to open my mouth while talking to the Auto-rickshaw drivers lest they detect my Mumbai accent and charge exorbitant amounts.

On our way to the National Gallery of Modern Art, I couldn’t help but notice ancient, dilapidated forts, most of them now in ruins though still faintly alive, others renovated with paint and a bit of structure support. Kaavash told me these structures could be found all over the city, telling tales of the great Mughal Dynasty hundreds of years ago. The prospect of living so close to the past in this manner appeared quite fascinating to me.

Best Rooftop Restaurants in Delhi to Eat Under the Mesmerizing Sky

National Gallery of Modern Art was a house for many beautiful paintings. The paintings on the upper floors were much prettier than the ones positioned near the entrance, and I’m quite pleased we persevered to venture into the many corridors that weave their way through this building. There is also a Jaipur House located opposite the NGMA in the same compound, where the security was a little stricter. Outside was a beautiful garden with well manicured lawns and beautiful sculptures in stone black. We had decided to opt for the Hop-On, Hop-off Bus service, popularly known as the HoHo Bus, to tour around the city that day. The concept is quite impressive – there are 10 of these HoHo buses running throughout the day, each at an interval of 40 minutes, covering the major tourist spots. If one wishes to spend more than 40 minutes at a particular spot, one could always wait and catch the next bus. The ticket was priced at INR 530 for one day, or INR 670 for two days. There is an attendant in every bus with a microphone system to announce important detail of each site. Our plan was to head over to India Gate after the NGMA since it was only a five minute walk from there, but we only managed to capture a faint glimpse of the monument, because the HoHo Bus had already arrived. Our flight attendant was a very jovial lady probably in her mid-twenties, enthusiastically talking into the microphone.

I could sense the bus heading towards the prime area, because the roads noticeably got much prettier and the shrubs by their skirting edges sported white lilies. We came across many rotary circles, which resembled the roundabouts in England and Mauritius. And I was indeed right; for the Rashtrapati Bhavan now loomed ahead of me, majestic domes rising above. There was barely any vehicles or people on the roads, and quite understandably. The lady told us this place becomes much prettier in the winter months, when the flowers have a greater chance of survival. Needless to say, I was very impressed nonetheless. We weren’t allowed to demount the bus – it was only a drive through.

The roads gave way to the Embassy lane, with broad streets and abundant trees. Embassies of all prominent countries were present here, like Saudi Arabia, Japan and even Pakistan. We got off at Dilli Haat, and it is here that I spent the most time. I was mesmerized at the variety of handicrafts that were on sale here. From fancy dream-catchers to INR 5000 chess sets, this place was quintessentially the artist’s haven. We had handmade wooden toys, miniature cycles, idols of gods in a plethora of styles, antique paper fans that resembled the authentic Chinese fans very closely, amongst pretty kurtas, sarees, handbags and jewelry. I don’t know about you, but the photographer within me went crazy here. But there’s more – Dilli Haat also houses restaurants from all the states of India, each one serving respective traditional food. If this doesn’t convince you to visit here, I don’t know what will! We spent a generous 2 hours here, missing two buses. The Delhi sun had taken a toll on me, for I was feeling quite dehydrated by this time. We got on the next HoHo bus with a lot of water, and made our way to the Qutub Minar. Before entering, Kaavash took me to a street cart to have a glass of Banta, something I’d never heard of in my lifetime. But I loved it to bits, and it served to me as natural electrol. It was a fuzzy mix of sweet and salty, with a faint soda feel. This drink certainly replenished my energy, and I was quite fit to get on with my tour. 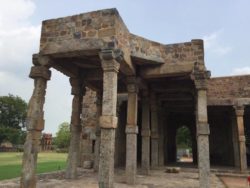 Qutb Minar was majestic. The tallest brick minaret in the world, this structure stands 72 meters tall. Qutb Al-Din Aibak commenced the construction in 1200 AD, although he couldn’t complete it. It was only completed by Firoz Shah Tughluq around a century and a half later. Lavish gardens with tall trees surrounded the monument, and served as a peaceful home to the many squirrels. There was also the Iron Pillar in the same complex, with many myths swimming about its existence. Graves and coffins, and an incomplete base of another minaret, certainly a failed competition to the Qutb Minar were present in the vicinity. We heard that entry into the Minar was earlier allowed, but proved to be a nuisance after attempts at suicide in the form of jumping down from the minaret’s windows.

In the night, Kaavash taught me how to use the Metro service. I was awed at how well-connected the city was with this mode of transport, and that too at dirt cheap costs. The various lines like the Yellow and the Blue lines, how to interchange them by following the concerned color footsteps and how to refer to the metro maps were part of the learning process. The next day, I would be travelling to Connaught Place alone.

I do hope very much to meet you in the next part of this series. Till then, goodbye! Famous Night Out Places for Foodies in Delhi
November 4, 2016