The third day in Delhi dawned on me a little cloudy and cooler than the rest, which got my spirits quite high up, but you never know when the clouds change their mind and decide to depart, leaving you under the sun’s mercy, so I contained my satisfaction. Walls around the area were beautifully painted

A tour of the Connaught Place was planned that day. I traveled by the metro, cautiously keeping an ear out for any helpful announcements and instructions. To reach CP by the metro, once must get off at Rajiv Chowk, a complicated, crowded and confusing metro station. The minute we exited the station, I saw the Indian Flag towering high above all buildings in near sight, and majestically sailing with the powerful winds that existed only at that height, leaving all of us down here sweaty. I absolutely loved how very organized this area is, with inner circles and outer circles. What surprised me was the multiple outlets of a single brand in this area. I swear I saw at least three Park Avenue shops and two Levi’s stores while making rounds of this place.

7 ‘Old is Gold’ restaurants in Delhi

There are a variety of high end restaurants and bars situated here, although all of them quite expensive. We just visited The Vault without eating there, but the interiors were very pretty, dim lighting and artistic windows. Another notable mention is the Lord Of The Drinks – for all Lord of the Rings fans out there. A big shout out to Palika Bazaar, a sprawling underground bazaar where everything fake is available. And I’m not even going to lie – I bought beautiful Vans shoes for INR 400, which come for INR 3000 if one goes for the original model. And there is no way you can tell they’re fake from afar. Kaavash told me that the authorities had previously tried to shoo away these vendors and close the whole bazaar down, but to no avail. So instead, they provided legal rights to this place so it could function better. 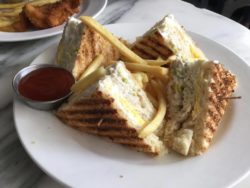 Lunch was at Cha Bar, a mini restaurant inside Oxford Book Store in the outer circle. On our way there, we saw the very creatively designed Statesman House in the background. Cha Bar had the most pocket-friendly prices I had ever come across for a restaurant of that decor and food. My Chicken Sandwich along with Kaavash’s fish & chips, along with one glass of cold coffee cost us INR 450!

As the evening dragged on, we left CP to head back to Kailash Colony. The night was reserved for Cyber Hub, Gurgaon. The distance was quite a bit, and our Uber taxi took around an hour and a half to consume the length. We had opted for cab sharing services for a cheaper fare, and to my luck and fortune, we were joined by the daughter of an army official. She lived in Vasant Vihar, a strict neighborhood for armymen and their families. The entrance was heavily guarded by police guards, and inside, the most peaceful surroundings with jogging tracks and many other fitness amenities. Delhi has a lot of these settlements, for the army and air force kernels. This was a huge novelty for me because Bombay, in comparison, has very few, the most prominent one being Navy Nagar in Colaba. 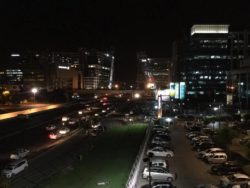 Cyber Hub in Gurgaon felt like the future. With massive glass buildings rising high on every corner, I was surprised to learn that Gurgaon was once a desert. I found that the Hub was mainly just fancy restaurants, ones that at least I could not afford. For those who are more fortunate, The Wine Company is a superb option for a date. We settled for the British food chain Nando’s, although I was sorely disappointed with the food that I had ordered.

There is a small circuit metro line running through the area, and we had to change the line to get onto the Yellow Line back home. All in all, I felt this day quite well spent.

Be sure to stay tuned for my next part in this series. Till then, a hearty goodbye! The World's Most Eco-Friendly Cities