Give Me A Week And Manali !

As the temperature continues to soar, the hills seem to be the inescapable lighthouses of respite giving direction to our wanderlusting souls. Call it filmy, but Ranbir Kapoor’s quirky penchant of trekking into the night to reach the summit of a mountain, in Yeh Jawaani Hai Deewani, is nothing but a celebration of how the forces of nature come together to create something extraordinary.

This brings us to the hill-station we’re probably thinking about when we think about that movie. That’s right, it’s Manali! 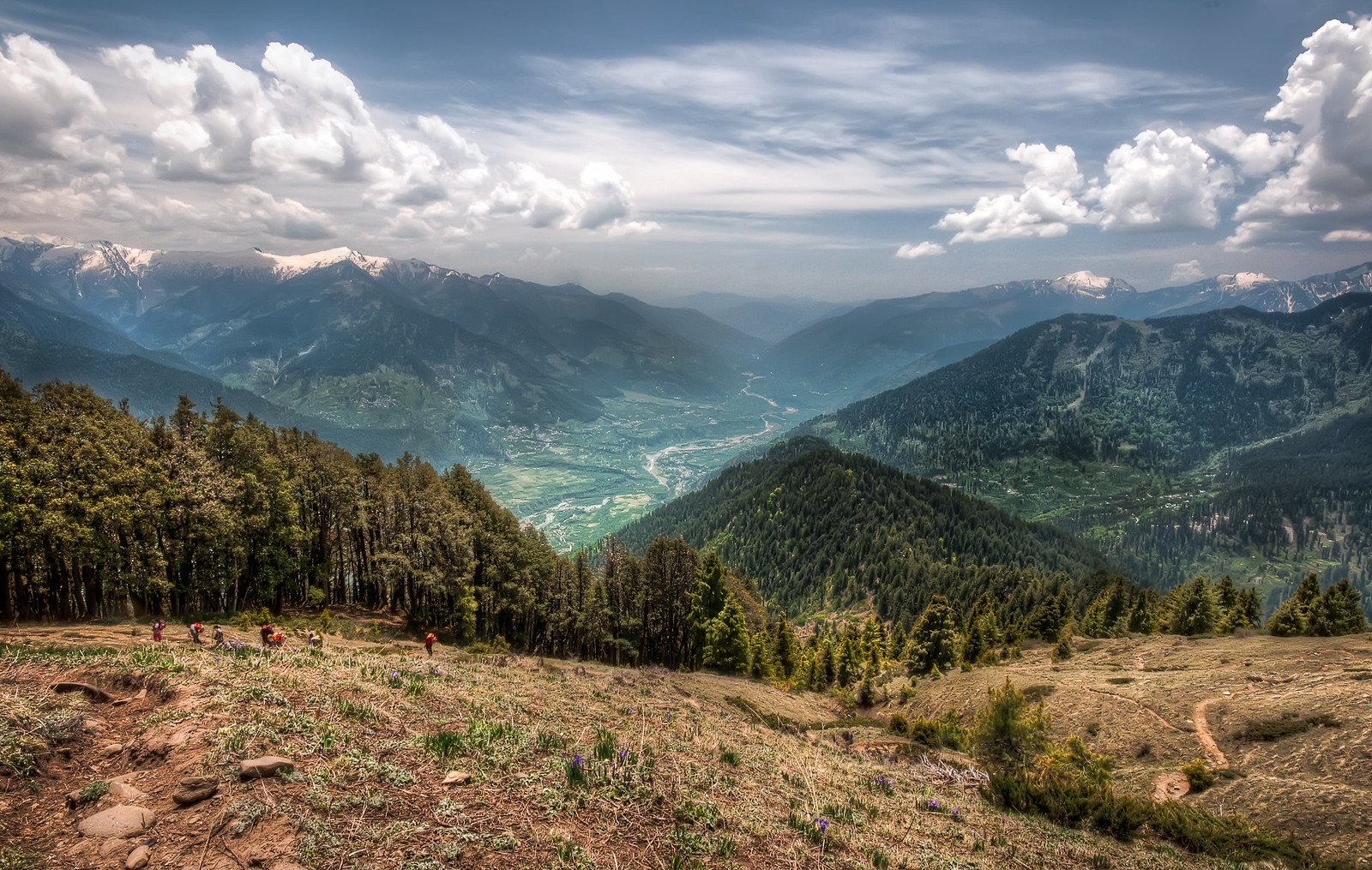 A week before exams, four girls decided to indulge in the inadvisable and procrastinate. Procrastinate, how? Why they decided to simply pack their bags and leave for the hills. (Again, not advisable if you were procrastinating even before you started your actual procrastination.)

Best Cottages In Manali To Reclaim Yourself!

As opposed to the controversy that surrounds the representation of the hill station ( the movie was originally shot in Gulmarg, but the location was referred to as Manali in the movie.), there is something quite unforgettable about the locale.

From the crisp air, to its chilly atmosphere and comfortable quaintness, there are many things that Manali can offer you that go unnoticed a lot of times. I decided, that this time, I was going to notice the conventionally unnoticed, and here’s what I did. Manali, is 570 km away from Delhi and 310 km away from Chandigarh. We had several options at hand. We could either opt for a long overnight journey in the bus, or fly to Bhuntar Airport and take a taxi from there. Obviously, the private bus service came to be a much economical option, where we spent Rs. 1100 for the roundtrip.

Disclaimer: If traversing by the bus, make sure to carry a motion sickness or vertigo medicine. We learnt this lesson the ‘barf’ way.

The nitty gritty of our experience lay in choosing our accommodation. Not only were we taking the cost effectiveness under consideration but were also looking at how and where our hotels would be located. We stayed on the new Hadimba road near the Hadimba Temple, which was located in a central location between mall road, and old Manali, so it became easy for us to traverse the town on foot. You can decide upon hotels in a similar manner, as per their areas of interest.

Other means of transportation, are the auto-rickshaws that run without a fixed price, so you may find themselves bargaining, but in times of need, they prove to be reliable friends.

Side fact: They’re especially kind during the rain.

What did we do there?

Manali, is a fairly easy town to travel in. Our life in Manali began from the bus depot along the Beas River and extended towards the nucleus, that was the Mall Road, and finally to Old Manali. By staying on the New Hadimba road, we drew a triangle, which as I’ve mentioned made it easy for us to travel to both of the walkable ends of Manali.

On our first day, slaughtered by a whole night of stars and sleeplessness, we walked into our hotels ready to jive. We each took turns in getting ready and made our way towards Hadimba Temple. Hadimba, prominent for her role in the Mahabharata as Bhima’s wife and Ghatotkach’s mother, is revered by the locals here. 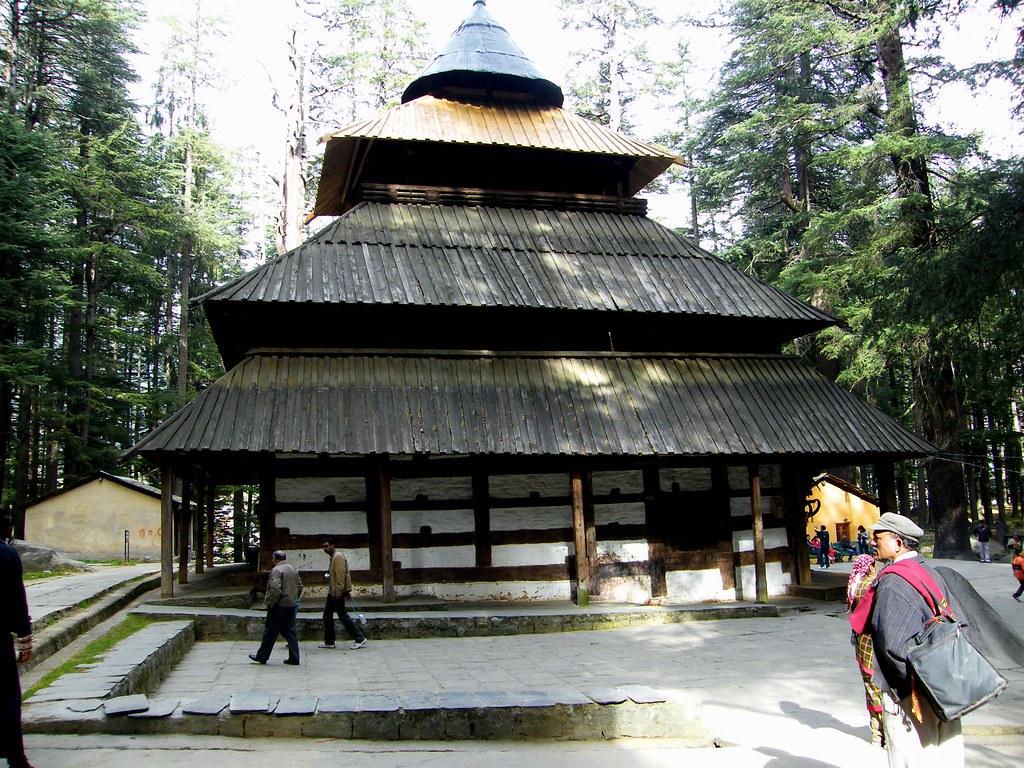 The wooden temple is surrounded by a Van Vihar, which was my favourite part of my time in that space. To walk among those tall pine trees, to reach a place of luminescent green grass! A friend of mine, kept looking at the blue sky and said to me, “This is why blue is the warmest colour.”, and I couldn’t agree enough. But I’ve always firmly believed, that hillstations don’t exist without the experience of trekking, and what better way to experience the magic of exerting muscles and breathing, by visiting the Solang Valley, followed by Rohtang Pass.
Yet, we were unprepared for the fact, that it was only April at that point of time; and that the Rohtang Pass opens for tourist season only in end May and June.

Declaration: We were going to hunt down the unnoticed, and so we did.

We had heard that Manali was home to a beautiful waterfall, with a view that belonged to the stuff of wonders. By taking a taxi, 5km outside Manali, I found myself at the base of Vashisht village, through which, I would reach a well travelled route which leads to the Jogini Falls. Is it difficult to ignore the village that I passed through.

With the quintessential hilly architecture, and quaint apple trees, my experience to the summit of the falls was as beautiful as was my experience in actually dancing with it. It’s so hard to explain the feeling of being drenched in the cool waters of the waterfall and soaking in the sun with a glass of local tea in your hand and who can even dare to forget that view? 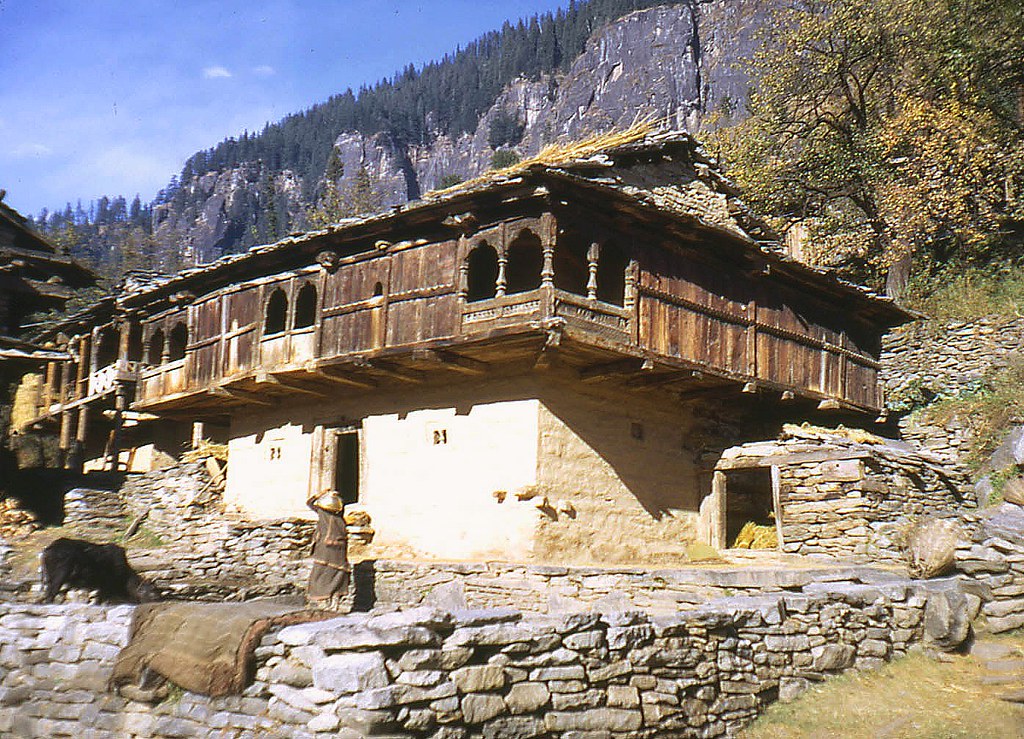 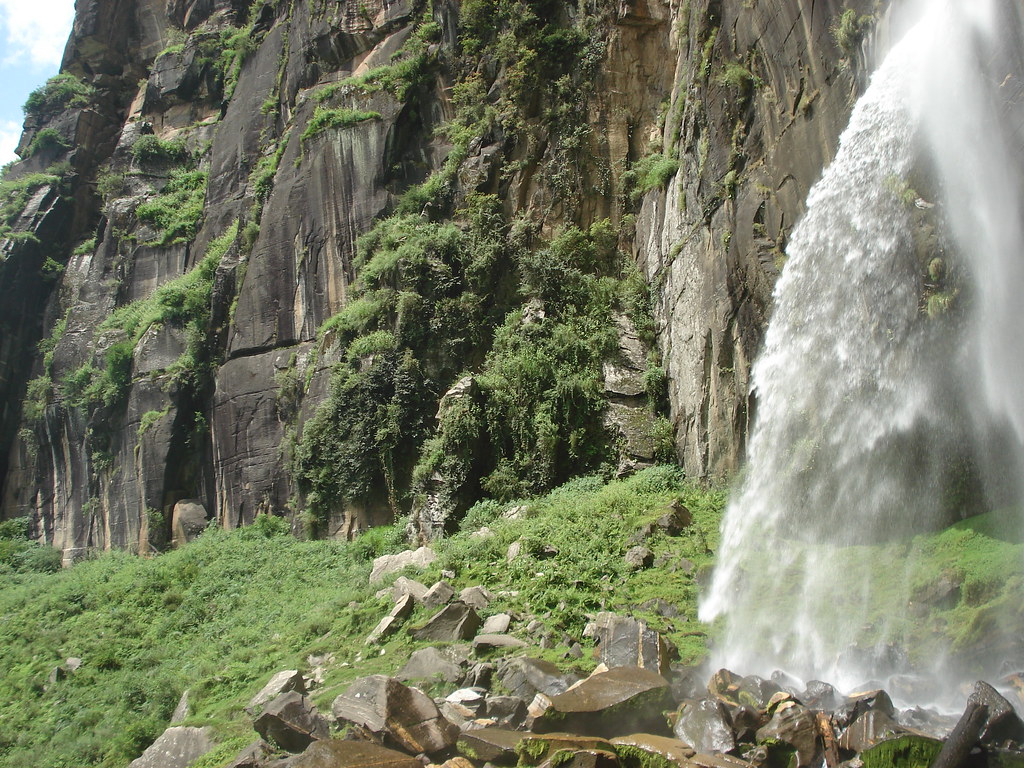 Another waterfall, are the Jana Falls that was under our radar, which was located near the Naggar Palace (coincidentally, also the place where the song sequence of Jab We Met was shot.) But the time crunch made it difficult for us to follow through our plans.
However, there’s always a next time.

These activities were our usual mornings. Physically exhausted, we’d make our way to the Old Manali side, which according to locals, represents the true spirit of Manali. Not as dense in population, as the mall ride side, old Manali is a site where you could indulge in river crossing activities, and visit the Manu Temple.
Disclaimer: You may just randomly find yourself holding a card for a yoga session. Definitely,maybe.

However, my favourite time of the nights belonged to the cluster of cafes which offer everything from fluffy french toasts to Nirvana tea. We made our way to cafe 1947, religiously to be a part of the live music performances on the weekends.

This is a space, where strangers exchange stories, enjoy good food, and learn new things. Or you could be lucky like us, who were present with a couple celebrating their 30th anniversary. (which means free chocolate cake.) 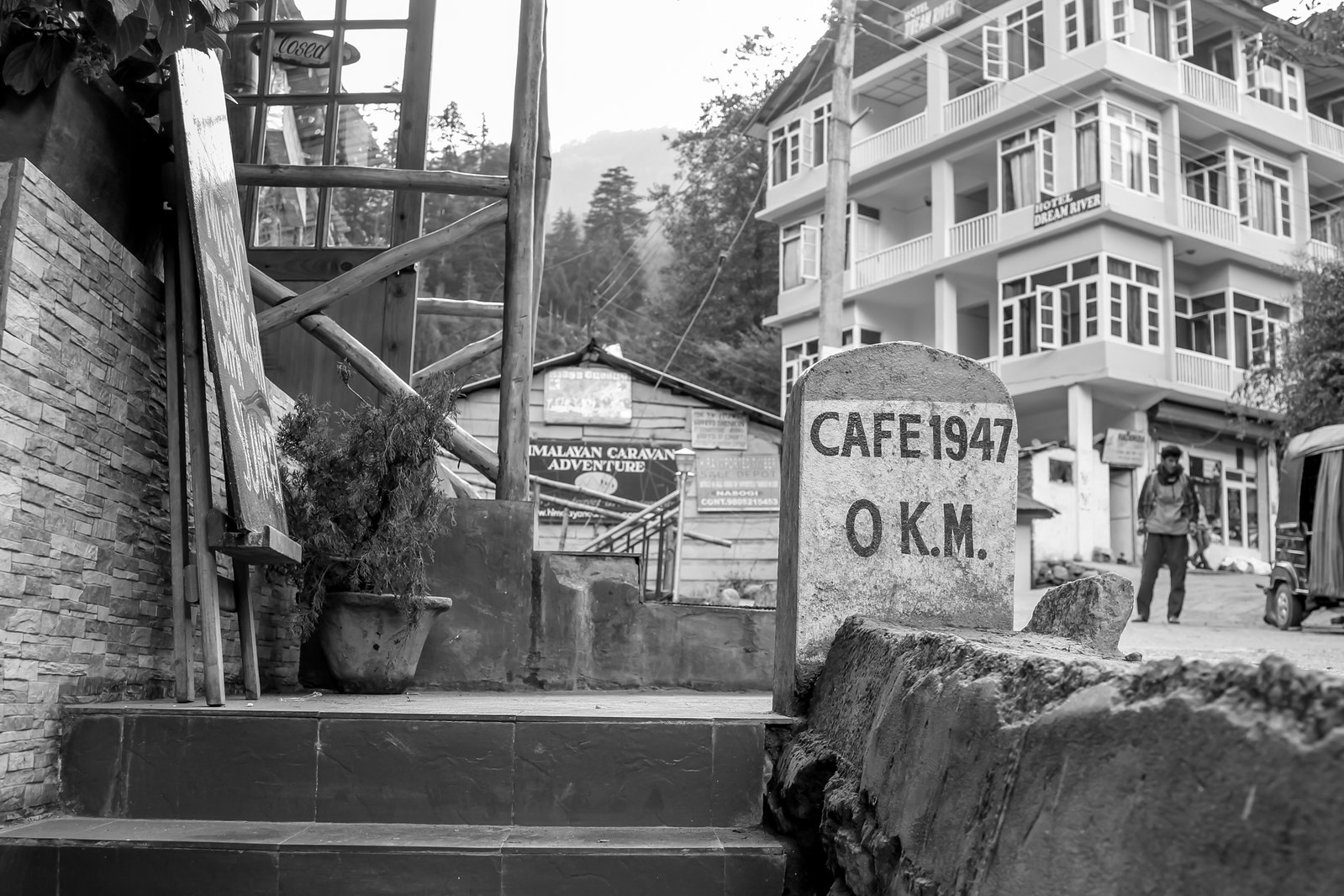 It was raining, as we spent our last afternoon in Manali, yet again in cafe 1947. The lights were out, and the musicians of the previous night were jamming in between guitar riffs in a lazy, comfortable tune. As the rain fell, and the strains of music coalesced with the droplets on the roof, it was a perfect moment of awareness. (Procrastination, never felt so good as it did back then.)

This Summer, We Tell You Where To Shake Off The Heat!

It’s that moment of being aware of your awareness that fosters my indescribable love for Manali. The greatest thing about the hill stations in the Himachal, is that they don’t exist in a vacuum and are inadvertently connected to each other, and so there we were, at the end of an exhausting sojourn getting into a 2000 rupees taxi for Kasol. But then again, that’s a story for another time don’t you think? 8 Road Trips In India You Must Take To Unwind !