As the capital of Bavaria, Munich has been standing tall among Europe’s cities for quite a while now. Its significance among German royalty has bestowed upon it a historical eminence unparalleled by most cities in Europe. It has consistently been ranked as one of the best, most livable cities in the world, largely due its practice of ‘German’ efficiency. It has become a center for art, finance, technology, culture, innovation, industry and education for not only the super nation of Germany but for the world. The annual Oktoberbest held in its vicinity attracts international tourism and is now celebrated in many parts of the world as homage. That is perhaps why you should certainly take three days off to imbibe the madness of the city.

If you want to participate in the Oktoberfest, then you have yourself two weeks to drop in. But that would derail your schedule for visiting anywhere else so I suggest you go there sometime around March/April, when it’s spring.

Germany but the locals are very proficient in English so you would not have to worry about communication.

Best Way to Get Around?

By walking and by utilizing the city’s extensive public transportation of U-Bahn (subway), S-Bahn (light-rail), Strassenbahn (trams), and buses. 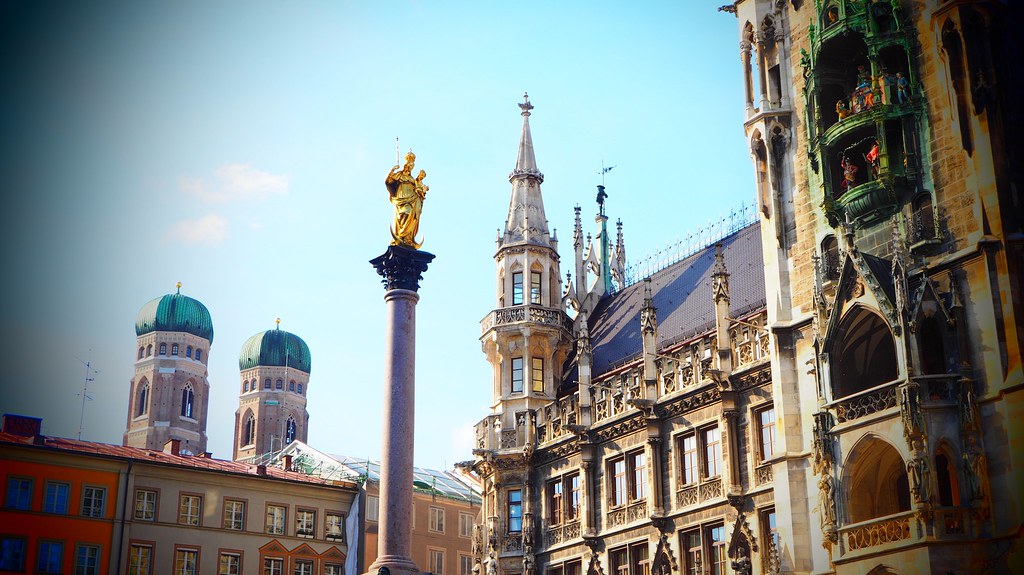 It is a large square that has stood witness to some of the most important gatherings in German history. It’s been named after the Marian column erected right in the middle of the square. It is bracketed by the Old City Hall as well the New City Hall, indicating its prestige as a political polestar. The Glockenspiel tower reenacts two stories from German myth and history at 11pm every day, with the use of figurines and clay dolls, which will be the most amusing 15 minutes you will spend that day. 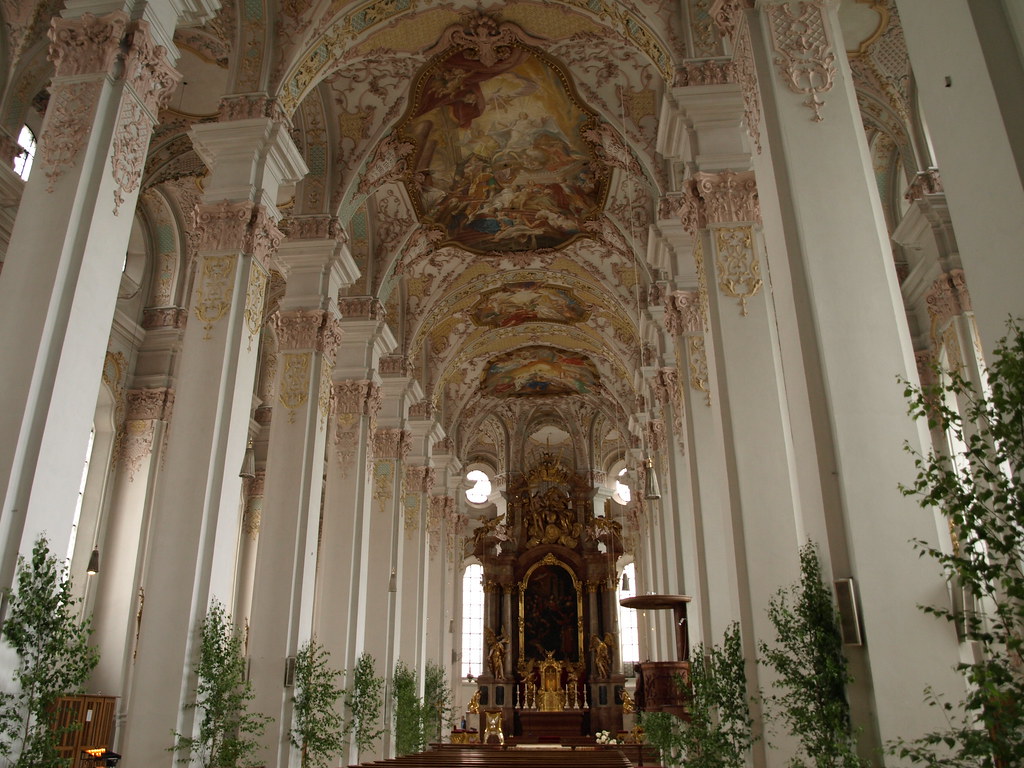 St. Peter’s Church is a Roman Catholic Church and the oldest in the Inner City. It was consecrated even before the establishment of the city at 1158 and is designed in the style of Bavarian Romanesque. The tower of the church would also be the one of the best places from where you can see the opulent skyline of Munich, but the climb can be quite exhausting, but if you are bursting with energy, why not give it a go?

While you’re at it with your examination of churches, the Heiliggeistkirche is yet another church in the vicinity. Its interiors are absolutely gorgeous, especially the frescoes and stucco ornament festooning the decor. Another churches in the Inner City include Munich Frauenkirche, St. Michael’s Church, Munich, Theatine Church, Munich among many others. Beholding their delicate construction and mincing through their interior would make for a very holy experience during your first day, a true testament to Munich’s architecture and religious foundations. 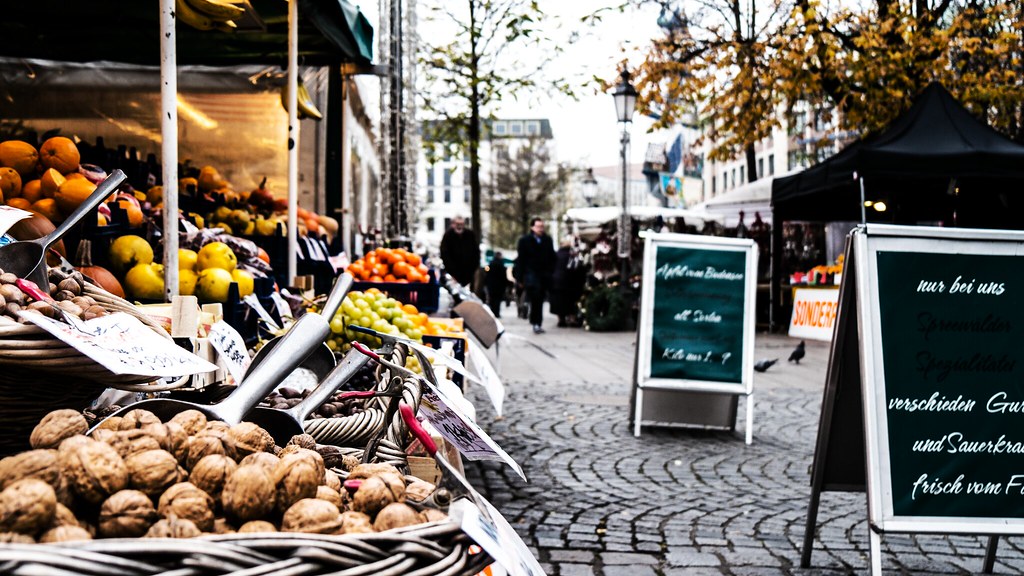 Originally a farmer’s market, it has become the most popular place to shop among the local Bavarians. Here you will be able to find your share of fresh produce, deli items, an assortment of vegetables and meat along with the specialty honey, cheese, wine and other food items. It’s also got a number of flower and plant shops as well as a number of stores selling the best in home and kitchen appliances. The market also hosts festivals celebrating the guilds in the market, such as Brewers’ Day, Gardeners’ Day, Summer Festival and many others. Have a hearty German lunch at the Ratskeller, where they have an amazing potato soup and classic bratwurst sausage! 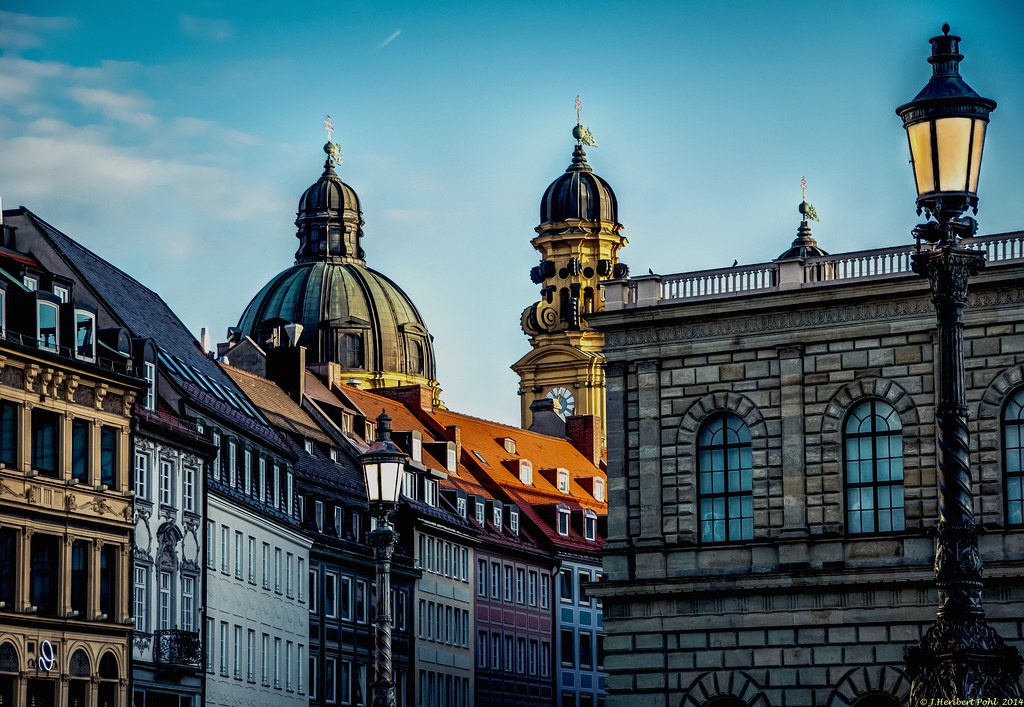 It is the former royal palace of the Bavarian monarchs and is constantly cited as having one of the most meticulous interiors of any museum in the world. It has been renovated throughout the centuries, explaining its eclectic styles of Baroque, Rocco, late Renaisscance and Neo- Classicism. Imperative sections inside the museum are the Königsbau, Cuvillies Theater, the Alte Residenz. Once you’ve spent a good deal of time absorbing the interior and the history of such a glorious structure, head to the garden outside, the Hofgarten, for some refreshing sense of greenery. 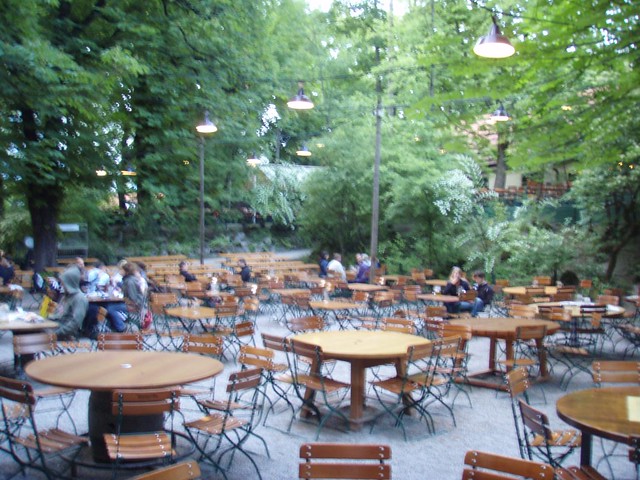 Even if you are not up for drinking beer, this brewery is worth learning about for its historical value on its town, as this was the haunt for the dukes and duchesses of Germany royalty over the years. It owns many original recipes for beer and has one of the largest tents in Oktoberfest. Have a sumptuous pizza dinner at the Mimmo E Co and don’t forget to eat the panna cotta as the dessert! 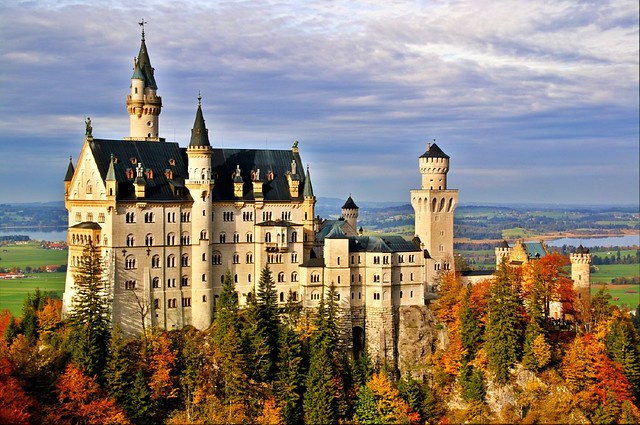 Though this is not strictly in Munich, it’d be amiss not to make the 2 hour train trip to Hohenschwangau from Munich. On the morning of your visit, you can take the 9:52 AM train to Füssen from the Munich Hbf. When you arrive at the Füssen train station, simply follow everyone else to the buses right next door and take bus 78 to the Castles. From the ticket center, walk a bit uphill to catch the bus. You could choose to walk, but the bus is worth the €2.60 return journey ticket price. It’s a steep climb, and there are sadly not many views along the way. The bus will drop you at Marienbrücke, where you can see the castle in the distance.

The familiarity of this castle can be attributed to its use in countless Disney movies as its architecture is nothing short of magical. Its colossal size is not only due to the dimensions of the structure itself but it is also aided by its location atop a hill. Some of the most lavish sections of the interior include the Hall of the Singers, Throne Room among others. To fully cast around the castle and its ancillary parts, such as the Lower Courtyard and the Garden, should take about 9 hours in total so prepare for an extensive tour. 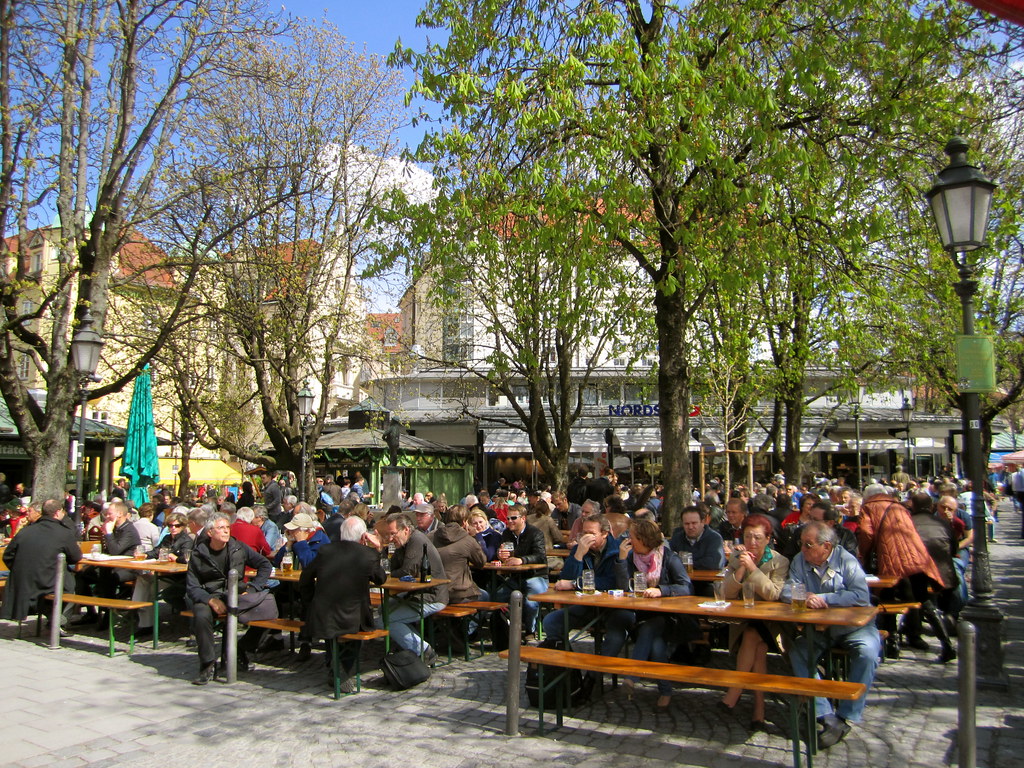 You might be quite tired after your long day at the castle so instead of touring through yet another museum or palace, you should head to the Kultfabrik neighbourhood. Now a thriving scene of nightlife, music, bars and restaurants, it will surely de-stress you. Have your dinner at the Goerreshof, Munich by consuming some of the classic Bavarian dishes such as schnitzel and strudels. 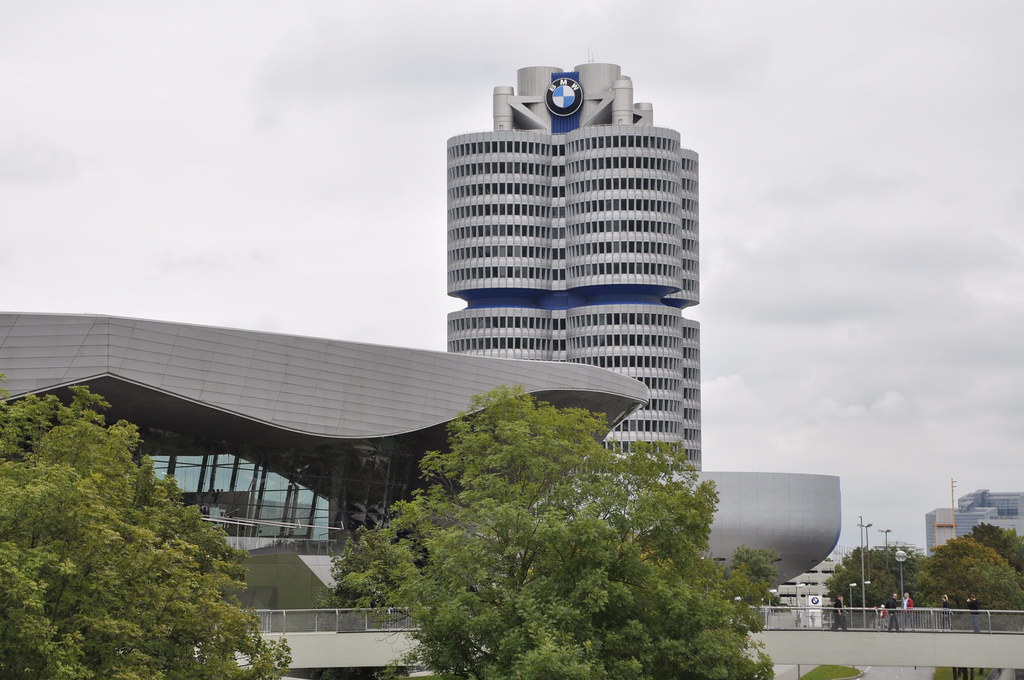 Germany is renowned globally for its manufacture of automobiles and aircrafts. Its expansive production of cars is so mind-boggling that you must walk through the BMW Museum to see how vast and loved the industry is. Its architecture is as modern as it gets, as are the vehicles exhibited inside. Shaped as a salad bowl or a white cauldron, it represents the economic and technological growth of Germany and should be marked off the list by all tourists. 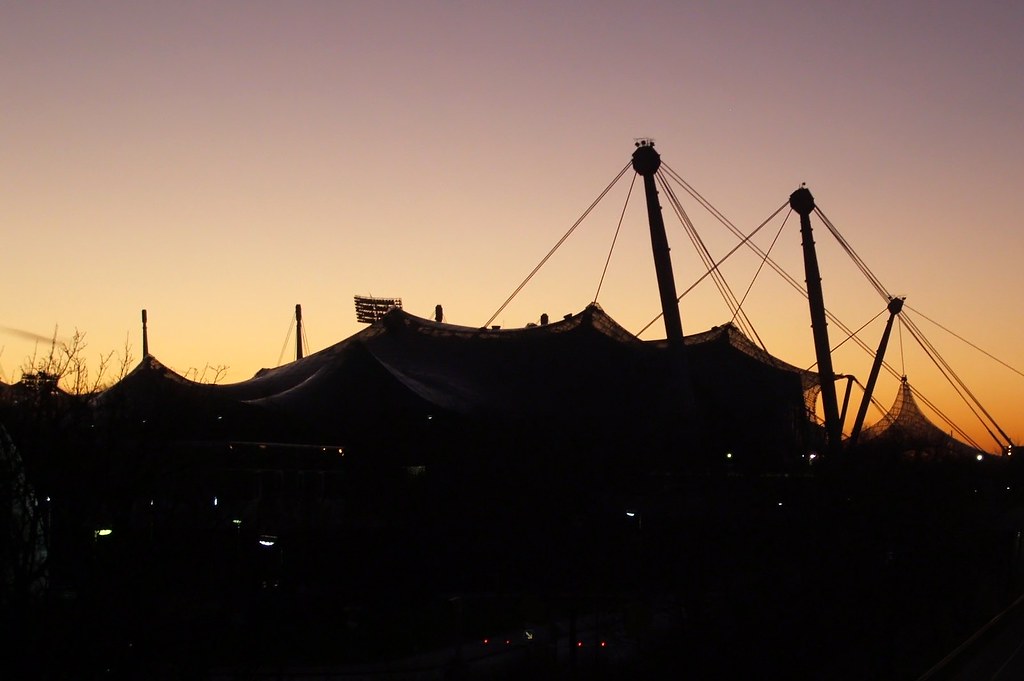 As in custom of every city that hosted the Olympics, you must take a few hours to gaze at the stadiums built for the occasion. They stand for not only the design acumen of the finest minds of the country but also as a celebration of a once-in-a-lifetime event that only a few cities are fortunate and capable enough to host. It continues to be a mainstay of Munich cultural, social and religious events as its facilities, such as the likes of Olympic Stadium, Olympic Tower and Olympic Ice Rink, provide plenty of ground and space for people and activities.

It also has a number of restaurants and cafes, any of which will offer you a chance to eat either local or global cuisine. I recommend the Restaurant 181 Business, a fine dining establishment with great views. It is also a revolving restaurant! 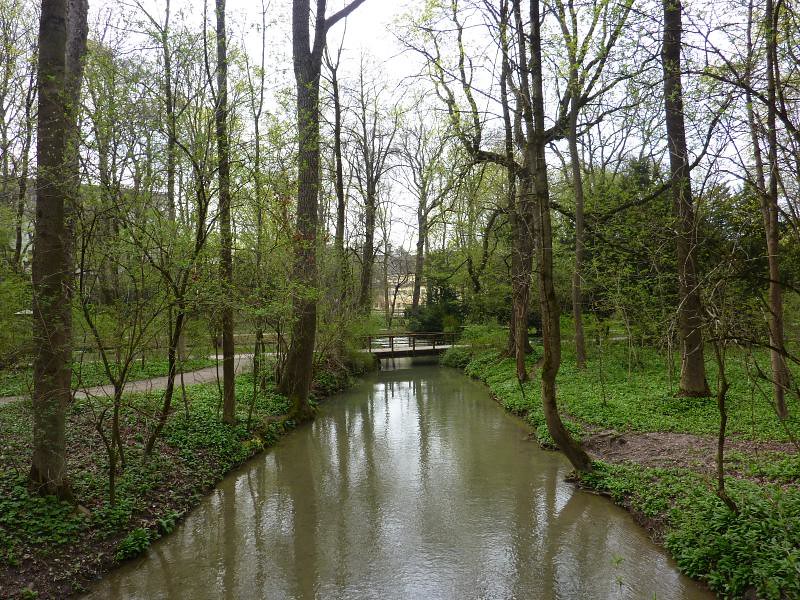 After lunch, head to the Flaucher Beach. Set by the river Isar, which flows down the Alps, its clean water is indeed a wonderful place for a swim. On the sunny days, you might be lucky enough to tune into some musical festival or a live performance. Grab a barbecue and just bask under the sun with the rest of your family. And when you want your round of water, skip down the white sandy beach and soak yourself up in the water! 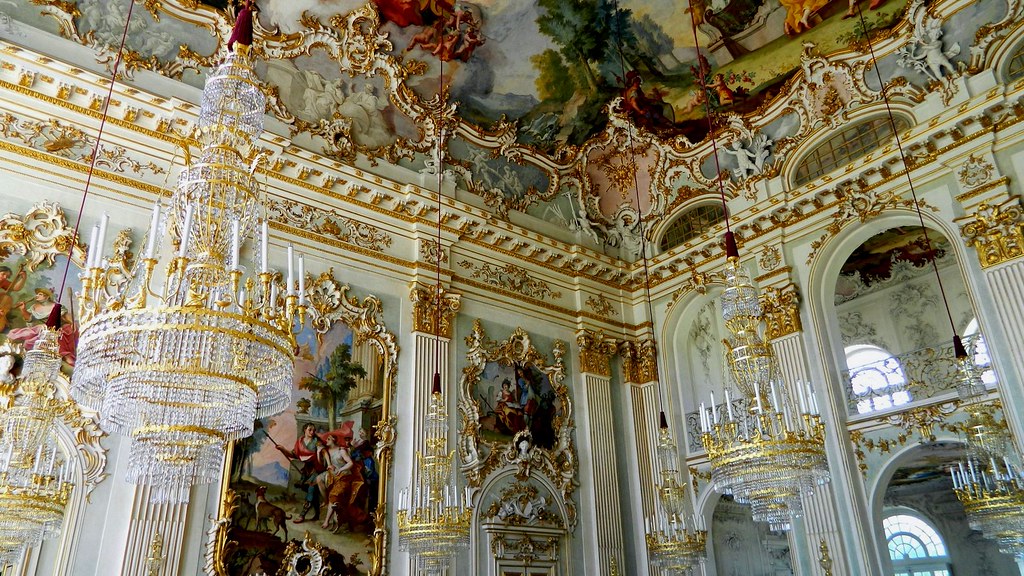 At the evening, check out yet another landmark of Munich, that is the, The Nymphenburg Palace. It used to be the summer residence of the Bavarian rulers. It was completed over four hundred years ago and still maintains its pristine condition. Among its parts are the Central Pavilion, the South Pavilion and Wings as well as an exquisite garden outside.

Finish your wonderful stay at Munich by having dinner at the Naxos Taverna, where you can get your share of authentic Bavarian food such as a moussaka and some delicious seafood!