Mauritius: A Haven in Blue – II “Did you give her a shower? Her coat smells amazing.”

As these sentences were pronounced in a thick american accent, with the rolled r’s and smooth t‘s, I looked down upon these twelve lovely new born puppies caringly, with the mother licking up their tiny heads and tiny legs in adoration every few minutes.

We were all huddled up around Matilda and her little babies, kicking and wriggling around their mother. This whole arrangement was quite a novelty, coaxing out motherly tendencies from within me I didn’t even know existed. A couple of american girls and I had been taking care of the litter for over two days now, especially when the mother went out for a bit to stretch her legs. They would snuggle with each other to share the warmth in the cold winter air. 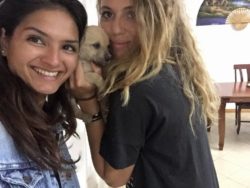 The one thing that I definitely did not expect when I started on my journey for Mauritius was taking care of a beautiful pregnant Matilda and later, her puppies. It was a little hard at first when we found her behind bushes with thirteen of her offspring. One of the puppies was unknowingly squished by Matilda herself, and it was very heartbreaking to see her constantly licking and sniffing at it in desperate attempts for revival. One of the girls completely broke down beside me and drove off in a car we had rented. Even I couldn’t bear to look at Matilda’s sorrowful eyes as I stared into the distant helplessly.

My memories with the other twelve puppies were far from morbid. Th apartment sprang alive with their whining and yipping the minute we brought them upstairs. From giving them showers, to nap times, when they would visibly be dreaming, all of it was so pure, it would elate my heart.

Mauritius was more than just tourist spots and photography for me. We could enjoy each and every place to its fullest because of the ample time we had on the island. The catamaran trip from Port Louis was a wondrous experience through the bluest of waters. The ship captain was a lively person who sang songs in creole at the top of his voice, frequently encouraging us to dance along his tune. We visited a beautiful mini island which was completely uninhabited. The temperatures hit 25 degrees as the afternoon approached. The air would only cool down from this point onwards, and the warm rays were quite welcoming against the backdrop of the cold sea breeze that blew perennially. Hot lunch accompanied with delicious barbecued chicken was served on the deck. Our appetites only grew stronger as we saw the food being cooked right in front of our eyes.

The catamaran trip served as an icebreaker for me. I had finally come out of my shell and started talking to the Canadians and the Romanians, and even the Russians with their rustic accent. My camaraderie may have been a mistake though, because as two English boys got comfortable with me, their playful nature suddenly emerged and I found myself being helplessly pushed off the deck and into the freezing waters. Even the ship captain was too busy laughing to offer me a helping hand. One fine day, my housemates and I decided to be a little adventurous and go trekking on the Le Pouce mountain, which was a little distance away from Port Louis. Our first stop, Port Louis, was a stark contrast compared to the rest of the country. Densely populated and littered, it took me back to the Indian streets. We visited the fruit market for our vegan friend Petra who only ate fruits and unsalted rice.

“I have 10-12 bananas every meal”, she commented nonchalantly, packing no less than 30 bananas in her bag.

The problem with little planning is that you may not reach your destination. Pia, another German girl, led us to the supposedly foots of Le Pouce, which she had found using Google Maps. Luck wasn’t with us that day. After two and a half hours of aimless climbing, we grudgingly accepted that we had been trekking along the wrong path. It definitely did not feel like a day wasted, though. With so much to talk about, being from various countries, time flew by effortlessly. View from up there!

I did scale Le Pouce later with a different set of people though. The higher we climbed, the foggier it seemed to get, but the view from the top was mind blowing. I could see the undulating Earth rising high to form mountains and fall elsewhere to give way to grasslands. Port Louis’s tall buildings seemed to cower below me. And looking beyond, the calm ocean proved to be the most peaceful sight that day. So we got a little crazy at the top…

My most enjoyable experience in this dreamy island was easily at Otentic, the only ecotent lodge on the east coast. I loved it so much that I visited this hotel twice, the second time being more enjoyable with a group of Pakistanis. This lodge was a revolutionary way to fuse modern lifestyles with the rustic ways of nature. Situated by the banks of the Southwest River, we were provided with kayaks to paddle upstream until we reached the waterfalls.

The braver people of our group took it upon themselves to climb from behind the waterfall so they could jump through it into the icy waters below. I truly wanted to do so myself, but the more conserved part of me simply wouldn’t let me budge. So after forty five minutes of just standing by the edge and never taking the leap, a boat loaded with people from various races arrived there as tourists. Upon noticing my hesitation, everyone on the boat started clapping for me in efforts of encouragement. And it was in that spur of the moment, that I let go of all my worriments and inhibitions to plunge into the deep waters below. Words will fail to describe the satisfaction I felt as I hit the waters with a huge splash. Posing at the Ile aux cerfs

The next day, we took a ferry from the shores of Otentic to an island called Ile aux cerfs. With an immense number of water activities which we lost our minds to, the highlight was surely parasailing high above the island.

Rumors started making rounds that it was apparently very easy to sneak into one of the five star resorts in Flic en Flac, the La Pirogue Resort, for breakfast. After endeavoring through the beaches, the rumors indeed proved to be true. The staffers were so kind as to direct us to the breakfast inn which was completely free for us! All of them assumed we were actual guests there. The breakfast was quite delicious; as I came back from the buffet with my plate full of all possible meats, cheese omelette, juicy sausages immersed in red beans and their gravy, and pan cakes with big lumps of whipped cream and chocolate sauce, I sort of felt guilty as my eyes fell upon Petra’s completely fruit filled plate. Hers was decorated with kiwi, papaya, watermelons, different types of melons and of course, the bananas. At one point, a waiter approached our table and our hearts sank. I genuinely thought we were busted, and I couldn’t have afforded breakfast there. But, in the most polite tone, the waiter asked if we would like some coffee or tea! On nights of little importance, we would often throw house parties and invite everyone on an exchange to have a little fun. One of our parties, interestingly, made its way to the beach. People got supplies for a warm bonfire as the cold night advanced. Everyone was huddled up near the warm fire, some even in their sleeping bags or snuggled up in blankets. A few creative minds brought sky lanterns which looked extremely pretty as they rose up high in the night sky.

The Tamarin beach, where we had set up our base, was thought to have dolphins in its waters as well, something everyone was obviously interested in. We ended up spending the entire night on the beach, falling asleep under various constellations, the Orion being the brightest of them all.

Early next morning, only a few of us managed to wake up, and boats were already lined up, so I went along with them, a very British group this time. Around forty five minutes later, the powerful engines quietened down, and we were all given snorkeling gear.

“Jump in the water with me”, said the instructor.

The water was very cold. Only the prospect of seeing dolphins in their natural habitat pushed me to take a dive. With a few tries, I figured out how to use my snorkeling gear, and completely submerged myself underwater.

What I saw beneath my was divine. I don’t think there is a more apt word in the English language to describe it. Silhouettes of hundreds of dolphins swam close to the ocean bed deep below me. The waters were so crystal clear, that even from the height, I could see everything in detail. And then they rose to the surface to breathe. And they were all around me. I get goosebumps even to this day, a year later, as I reminisce this experience.

Almost as if destiny wanted me to explore the underwater land further, an opportunity to go scuba diving presented itself before me. They were giving 50% off to celebrate the establishment of their business, and I was going to be the lucky tourist to receive this privilege. Even with the discount, I had to pay 2000 Mauritian Rupees, and I would later learn that the whole discount story was a lie to lure uninformed and naive tourists like me to become their clients.

I would have been angry with myself had the experience not been surreal. After an hour worth of breathing exercises and training for sign language in case anything went wrong down there, I put on my suit and the oxygen tank on my back to plunge deep underwater. A guide was constantly around to aid me in case of any problems, but I was quite comfortable. Without a licence, I was permitted to go upto 12 meters deep in the water. I’m so glad I got the opportunity to go scuba diving in Mauritius, for the waters were so clear down there, I could see all the coral reefs and thousands of different fish swimming around me, zooming away as I extended my hand to touch them. Vibrant colors and a plethora of patterns were etched upon their bodies. It was a treat to swim past the rocks and be able to touch the sea bed in the shallower waters. I could see the bed making a sudden descent ahead of me, which was a forbidden area. I resolved to get a scuba diving licence, which costed 120,000 Mauririan Rupees, in the near future. One of the many beaches of the island

The 45 days that I spent in ile Maurice, as the french called it, were blissful. I came back to India with a truck load of beautiful memories and interesting tales to tell people. It is not every day that we get opportunities like these, which is why I consider myself truly lucky for having experienced the wondrous island that is Mauritius. At the top of Black River Peak All You Really Need Is Ecuador 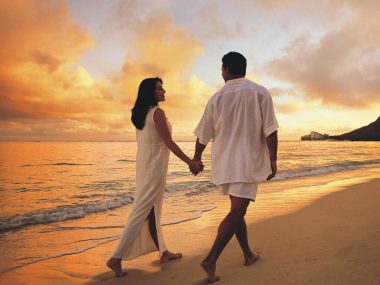