Most Offbeat Treks In India- Can’t Miss The Bottom Two!

Trekking is undoubtedly the most stimulating course of action anyone could ever enroll for. It definitely brings out the explorer in many and the child who is hungry to take it all in. Trekking is perhaps the most convenient way to exchange spiritual dialogues with nature and India is blessed with the bestest elements of nature where you gain to explore the offbeaten paths and sing to the tunes of mother nature. Check out this killer list of most amazing offbeat treks in India. 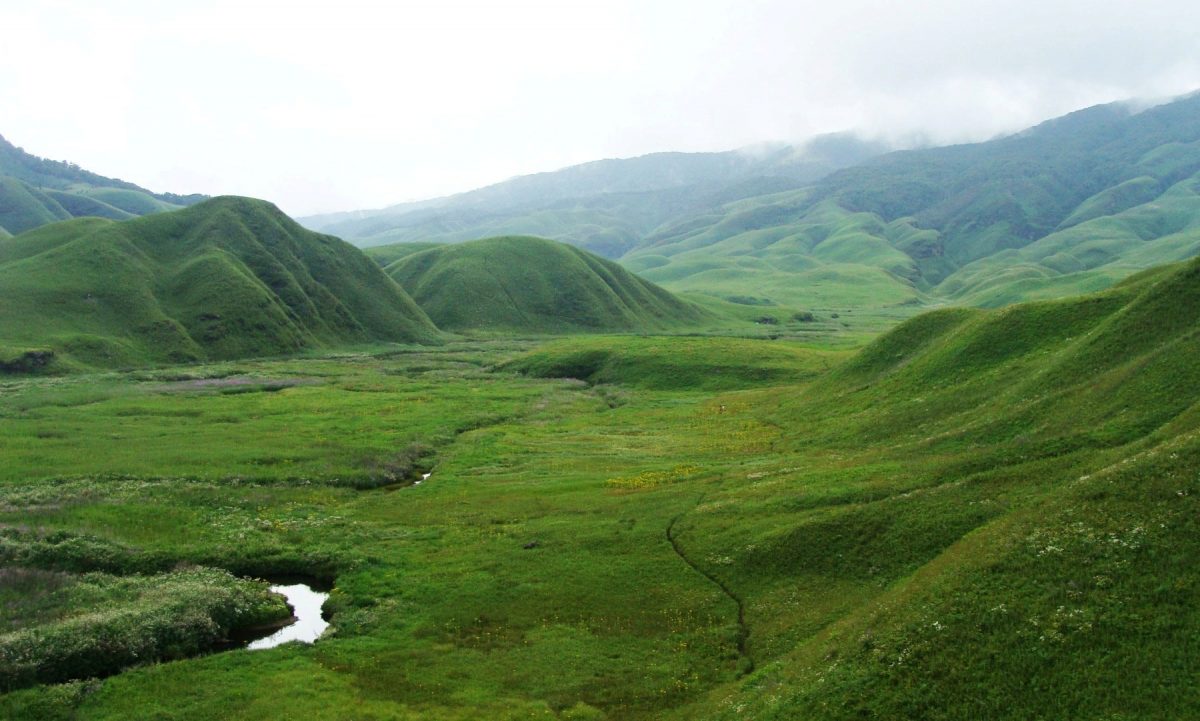 This 17 kilometers long trek is probably the highest peak in all of Nagaland and is one of the original and offbeat treks in India that very few have embarked upon. The view from this point is totally breathtaking as you can enjoy incomparable views of the Dzukou Valley that sits elegantly amidst emerald green hills, watery skies and flourishing forests.

Particularly known for its exquisite route navigating through green hills and bamboo groves, the trek also has the tallest rhododendron in the world lengthening about 130 ft. To put it differently, the bountiful of nature will make you absolutely feel at home.

A Himalayan Trek To The Bhrigu lake

Best Season: October to May Located in the ferocious Himalayan range of Ladakh, the Phuktal Monastery is only reachable by foot. The monastery lies in the Lungnak Valley and is built around a natural cave that has been visited by several scholars and travelers in the past. It almost takes around a day to reach the monastery from Dorzang.

It fits well in the category of offbeat treks in India as not many people know about it. Phuktal was built with the aim to preserve the Tibetan essence of life which is why it is the perfect locale to meditate and gather tranquility. Next up is the winsome trek in Himachal Pradesh, known as the Bhrigu Lake Trek. This one is quite a beauty. The Bhrigu Lake trek is situated at a surface elevation of nearly 4,300 meters (13,900 ft) in the Kullu district of Himachal Pradesh. The trek is close to Manali and lies on the eastern face of Rohtang pass.

Experienced as well as amateur hikers and explorers can traverse though this alluring trek. Nature lovers, be sure to witness the high altitude alpine grassland which is one of the highlights of this charming trek. In conclusion, it is surrounded with glistering white hills, Bhrigu Lake trek is a sure shot visit.

Best Time to Visit: May to Mid – September

Into The Himalayas: Bhrigu lake 2 The Roopkund Trek aka Mystery Lake is another high altitude glacial lake sitting on the lap of Trishul massif. It’s been nicknamed as ‘The Mystery Lake’  because of the skeletons found near the lake. Sitting at an elevation of 5,029 meters, the trek is mostly frozen but whenever the snow melts down, skulls can be found near the lake.

Researchers believe that the skeletons are most likely the remains of people killed in the 9th century hailstorm. It is the perfect trek for thrill seekers that will leave you befuddled and bewildered for quite some time.

I Dreamt, I Explored, I Got A Story: Leh Ladakh!!

Most Enchanting Pictures of Roopkund Trek! Perhaps the most beautiful yet less known treks of Himachal Pradesh, the Kugti Trek sits at an elevation of 16,600 ft and is often visited by the Gaddi tribes to traverse across Lahaul and Spiti with the hope to forage for themselves.

Enclosed with challenging terrains and pathways, the Kugti trek is definitely a fierce one and evidently one of the most intriguing offbeat treks in India. The trek initiates from the town of Bharmour which is located near Chamba and routes amidst Pine and deodar, emerald meadows, extensive peach and apple orchards.

Book a flight to Ladakh.

In addition, Kugti also has screaming waterfalls that add to its beauty and nonchalant charm. Furthermore, if you traverse a bit more higher in altitude, be sure to fall in love with the imposing stunning icy glaciers and snowy terrains. The Mandani Valley Trek swiftly climbs up on the ladder of offbeat treks in India, however, it is easily be claimed to be one of the most challenging ones too. Falling in the Garhwal range of Himalayas, this trek lies within Kedarnath Wildlife Sanctuary which further connects Madmaheswar to Kedarnath near Chorabari Glacier, i.e. the originator of river Mandakini.

At an elevation of 4750 m, Mandani Valley Trek is a dreamy trek acts like a dangerous bridge between two Kedar, Madhya Maheshwar and Kedarnath and hence captured the attention of daredevils. Completely cut off from the crowd, this amazing route allows you to cover three high-altitude Passes.

Book a Hotel in Leh

This trek is one of the most unexplored treks in all of the India and is associated with a blend of ancient Hindu mythological stories. Legend has it that this trek is where the Hindu Goddess Durga killed the evil Mahishasur. The excursion starts from the village of Ransi and navigates through dense forests and successfully terminates at Kedarnath.

Distance: May vary but the Valley is 4-5 kilometres long. Located in the Parvati valley of Himachal Pradesh, Kheer Ganga Trek is one of the very popular offbeats trek in India amongst the young hearts. Partly effortless and partly strenuous, this trek offers a scenic view of skies and stretched greenery.  Locals believe that this is the place where Lord Shiva meditated for over 3,000 years. The route is quite demanding and you might have to traverse through waterfalls and breathtaking bridges. However, all this hard work would seem worth it when you submerge yourself into the Kheerganga hot spring bath. Not to mention, the Kheer Ganga Hot Spring will kick the pain right out of your body.

Best Time to Visit: May to November A possible candidate of least explored trek in all of the India, Lamkhaga pass acts as a bridge connecting the northeastern Garhwal and Kinnaur in Himachal Pradesh. Lamkhaga Pass Trek is strenuously beautiful and sits at an elevation of 5420 metres.

One of the most stunning offbeat treks in India, it’s journey encompasses of numerous alpine meadows, moraines, dense forest of Deodar, Pine and Bhojpatra. Surrounded by snowfields and mountains, Lamkhaga Pass trek is an absolute candy to the eye.

Book a Hotel in Leh

The trek initiates from the village of Harsil and terminates at Chitkul. In addition, glaciers and snow lands act as adornments offering a truly lifetime experience. Moreover we’d like to assure, this trek promises to bring out the wildest version of you. Auden’s Col Trek is one of the most challenging and physically demanding treks of India and least explored treks of Garhwal Himalayas. Furthermore, this trek takes you to an elevation of 5490 meters and was named after its discoverer John Bicknell Auden, who was a British Geographical Survey Officer.

Furthermore, the trek commences from Gangotri and terminates at Kedarnath. Considered as strenuous, this trek makes way through moraines, narrow cliffs and rugged ridges. Since the conditions are extreme therefore, only experienced trekkers are advised to traverse through these terrains.

Best Time to Visit: May- October

We hope these offbeat treks in India have inspired you enough to get you going. Its time to be thrilled and get ready for a real adventure! Get Ready For The World's First Ever GOT Themed Hotel !