As the name of ancient Rambagh Palace hits No.1 in the List Of Top Hotels In India and 15th in the Best Hotels In The World.

Rambagh Palace is also categorized as the “Jewel of Jaipur” which has been successful in making a place in the hearts of people all over the world. The 5-star heritage hotel is a perfect amalgamation of antique artistry jammed with modern luxuries. Along with the glimpse of royalty, the palace offers the perfect culinary experience- one can die for!
Coming down to the Steam Bar placed in a restored train just steal all the attention of the tourist and tempts every individual to add the place to their wishlist. Talking about the character that makes it more treasurable is its rare story. The grand haveli wasn’t made for any queens or kings but was devoted to the queen’s handmaiden. After falling years, it was converted to a guesthouse and hunting lodge and later as the residence of Maharaja Sawai Man Singh II and his queen, Maharani Gayatri Devi. After that, it didn’t take much time to make a space in the hearts of the Jaipur locals and tourists from all over the world. Along with this Palace, seven other Taj Hotels has been acknowledged in the rest categories this year. The Taj Exotica Resort & Spa, Goa features in the Best Resorts in the World category, and the Top 30 Resorts in Asia, The Pierre, A Taj Hotel made it to the Top Hotels in New York City category.
In conclusion Rambagh Palace, Taj Lake Palace, Udaipur, and The Taj Mahal Palace, Mumbai also feature in the Top Hotels in India which directly means that visiting India is worth a lifetime. Experiencing India’s heritage hotels like Rambagh Palace is a feeling that you can treasure endlessly. It’s hard to guess that whether the architecture, the enthralling views, or the cheerful “Atithi Devo Bhava” gesture made Rambagh Palace- the eye candy in the hearts of many.

Q) Can we visit Rambagh Palace?
A) Though the Palace is now a hotel, visitors are also allowed to take a tour.

Q) When was Rambagh Palace built?
A) It was originally built-in 1835. 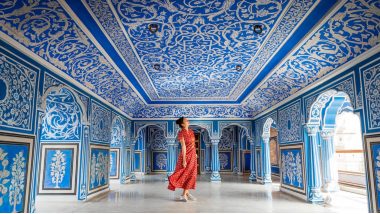