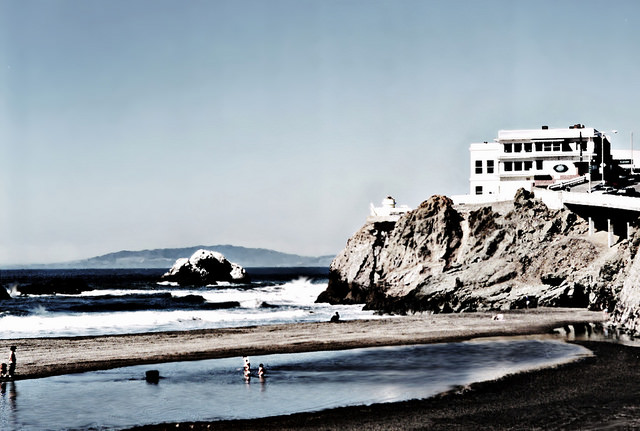 The Summer of Love refers not to the cool, lovely summers the city of San Francisco experiences but also the social phenomenon that transpired in the year 1967 in which throngs of hipsters and youth, the ‘flower children’ settled into the city and vocalized their messages about peace and love. Their eclectic interests in art, culture, fashion, music, food paved the way for a legacy of liberal activism on which the city has built its reputation. Today we look at how you can imbibe the magic of San Fran in three days.

The summers, although pleasant, render the city quite misty and the spring summons showers every day so the best time to visit would be between September/October, at the cusp of fall where the leaves are browning and the cultural festivals are galore!

English would suffice, though bear in mind that city is very multilingual as a whole.

Best Way to Get Around?

The San Francisco MUNI, that is, the range of transport that include buses, trains, cable cars, metros and streetcars, would be your best option and since you will be staying for more than a day, get a visitor 3-day pass that will allow you unlimited travel along these modes.

The most iconic structure of not only San Francisco but of Northern California, it’s an structural achievement. Surely the first activity on your list should be a walk across the entire length of the bridge. Make sure it’s a bright day devoid of fog as that tends to hamper a lot of the pedestrians. It should take around 30-40 minutes to cross to the other side but the number will increase the more you stop to marvel at the Bay or to take photos, which you are at full liberty to do so. You can choose to bike if you have got the pedal power. 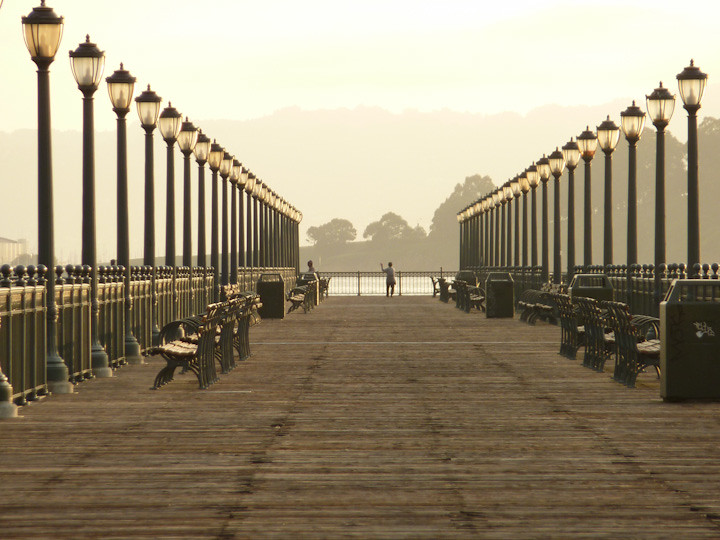 This is a popular shopping center and rest stop for many tourists who want some phenomenal views of the Bridge, the Bay as well as the island of Alcatraz. Some of the entertainment spots in the area include shops, restaurants, game arcade, aquariums, street performances, a two-story carousel as well as an animal exhibit featuring Californian sea lions. Treat yourself to some seafood, such as the calamari and bisque, at the Eagle Cafe. 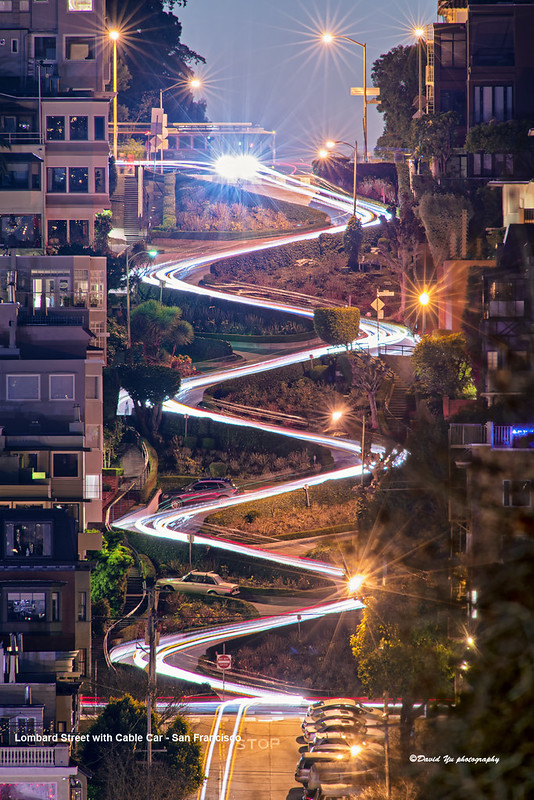 This street is the epitome of the hilly surface of the city, as it has been claimed as the most crooked street in the world. Take your cable car to the top and gaze down the street, where the cars and bikes are wrestling through the steepness and the curves. The street is also lined with extensive, rolling flowerbeds and Victorian houses that will make your journey through it memorable and picturesque. 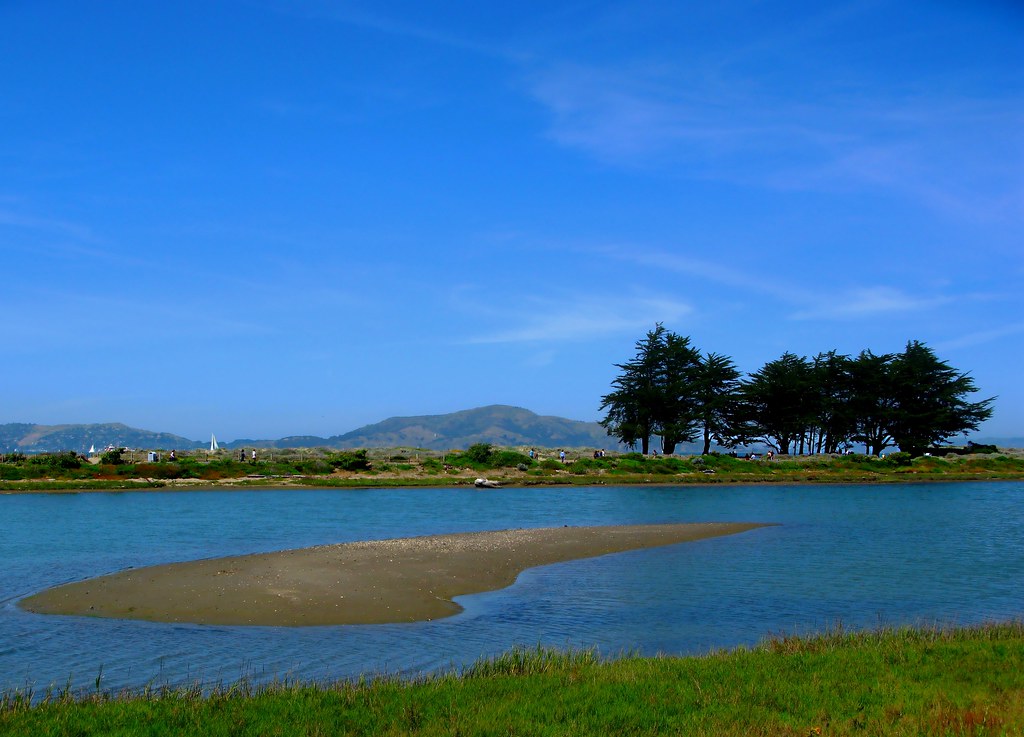 Head back to the recreation area of the Golden Gate Bridge with a trip to this former US Army airfield. San Francisco has been a den for army veterans throughout its history and what better way to learn and honour their service by jogging along the area. Featuring a beach, fishing park, pedestrian pavements and open space for any number of recreational activities, this is surely a soothing way to finish your evening.

Dress up for a fabulous dinner at Fino Bar and Ristorante, in which you can eat the best Italian food in the city, including the zabaglione and the gamberi.

Located 2km offshore from the city, this island was developed with facilities of a military prison. It operated as a federal prison for thirty years and held the most notorious gangsters at the time such as Al Capone, George Kelly among others. With its military fortifications and some natural sources such as a rock pool, a sea bird colony, this prison will surely capture you in its premises for most of the day. Some important segments of the island include the Lighthouse, the Main Cellhouse, the Citadel and others. A guided tour will educate you about how the prison operated and first-hand audio records of former jailmates and guards will inform you about the prisoners and their actions. 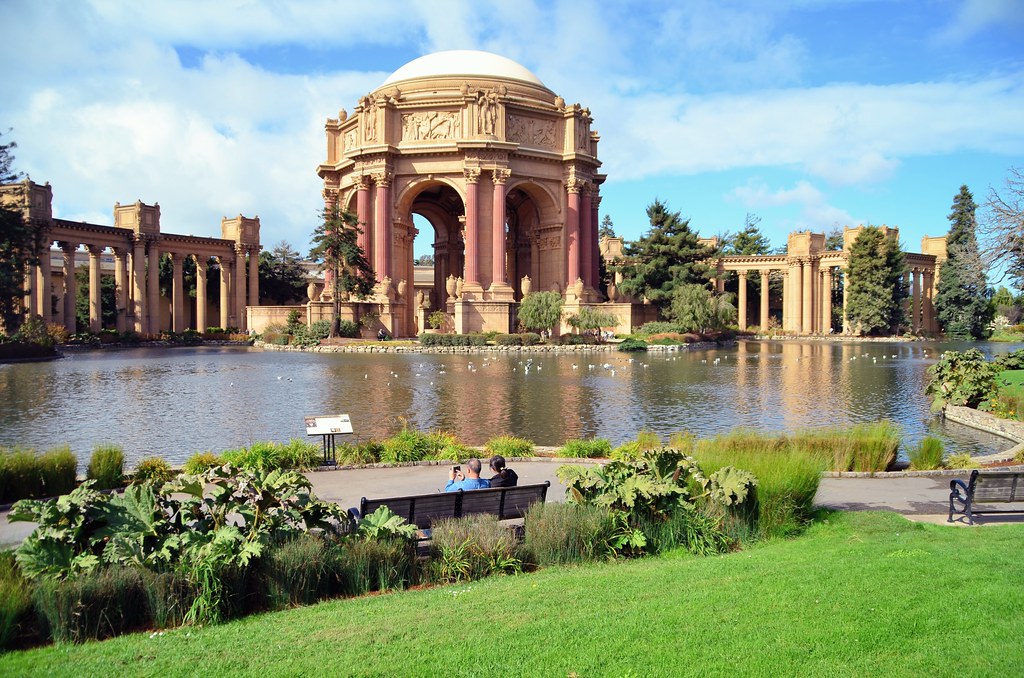 San Fran has been providing resources and an engaged audience for fledgling artists and musicians for a while now and this palace is a testament to the artistic currents that run within the city. Set in the Marina district, it is the host of numerous art festivals that are featured across the year. The monument has been deemed gorgeous by so many people that it has become a mainstay in wedding photographs and San Francisco cultural fests. It is built around a small artificial lagoon, the structure is certainly an immense emblem of the city. 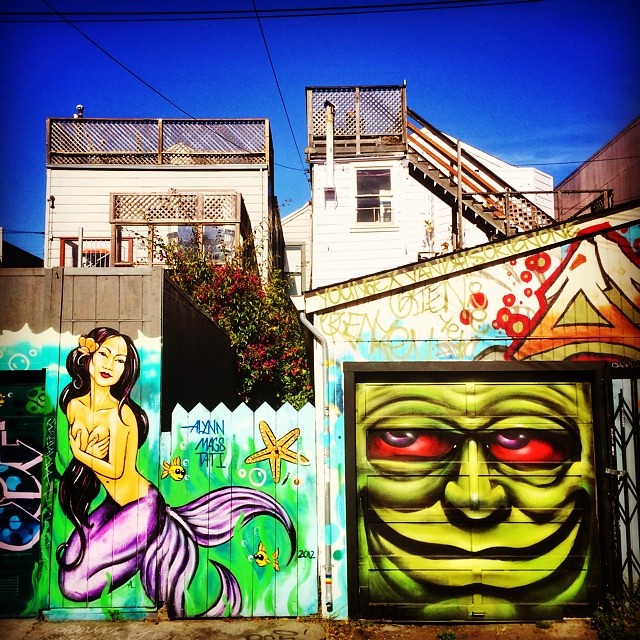 Also known simply as the ‘Mission’, is a neighbourhood in the city renowned for its modern art scene. Its history rooted in Spanish colonization, it has become a Hispanic enclave, renowned for the number of Mexican restaurants and cabaret bars decked up in its streets. Be certain you absorb the countless murals lavishing the neighbourhood with its colour and complexities. It has become a draw for younger people who are enthusiastic about food, music and the fine arts. Get your fill on some delectable burritos and tacos at La Taqueria.

Bask under the setting sun at this recreational space after your meaty lunch. Set atop a hill, it provides grand views of the city, its skyline, the Bay, the Bridge as well as that of the island. The park offers various sporting grounds, such as tennis courts, a basketball court, a soccer field, a children’s playground and a dog play area. This should be the ideal location at which you watch the sun set. 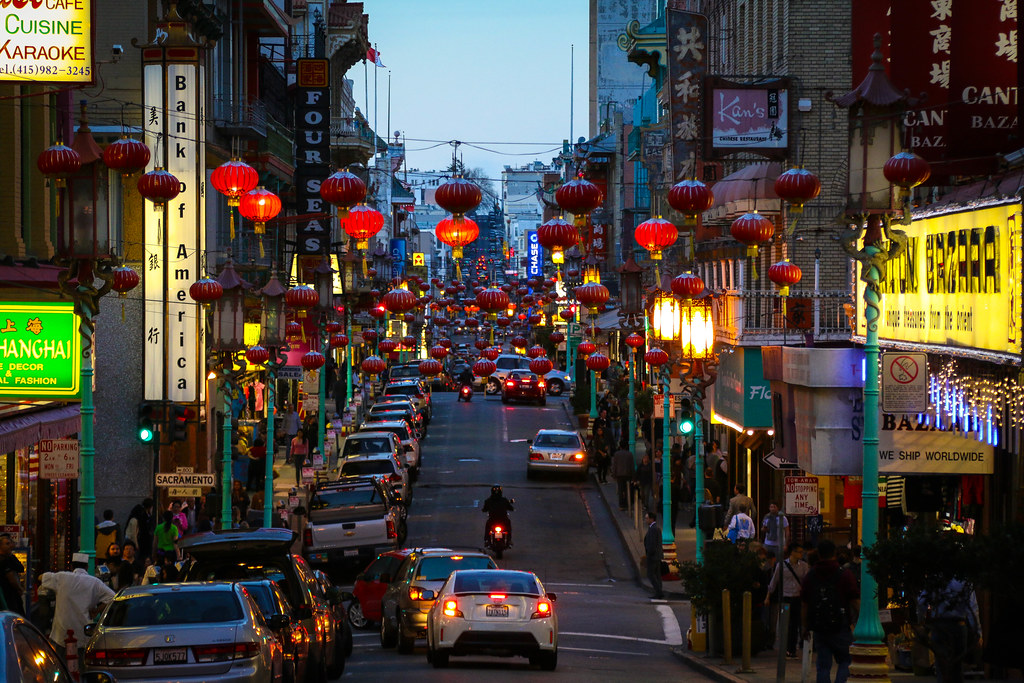 The Chinatown of San Fran is not only the heart of the East-Asian population of the city, it is actually the oldest Chinatown in North America, with the largest Chinese community outside of Asia itself. This enclave still holds the identity of China with its restaurants, shops, hospitals, community centers and more. It has been told that this Chinatown witnessed the birth of the American-Chinese dish Chop Suey. Have your dinner here at Hunan Home‘s; your traditional Chinese meal awaits you! 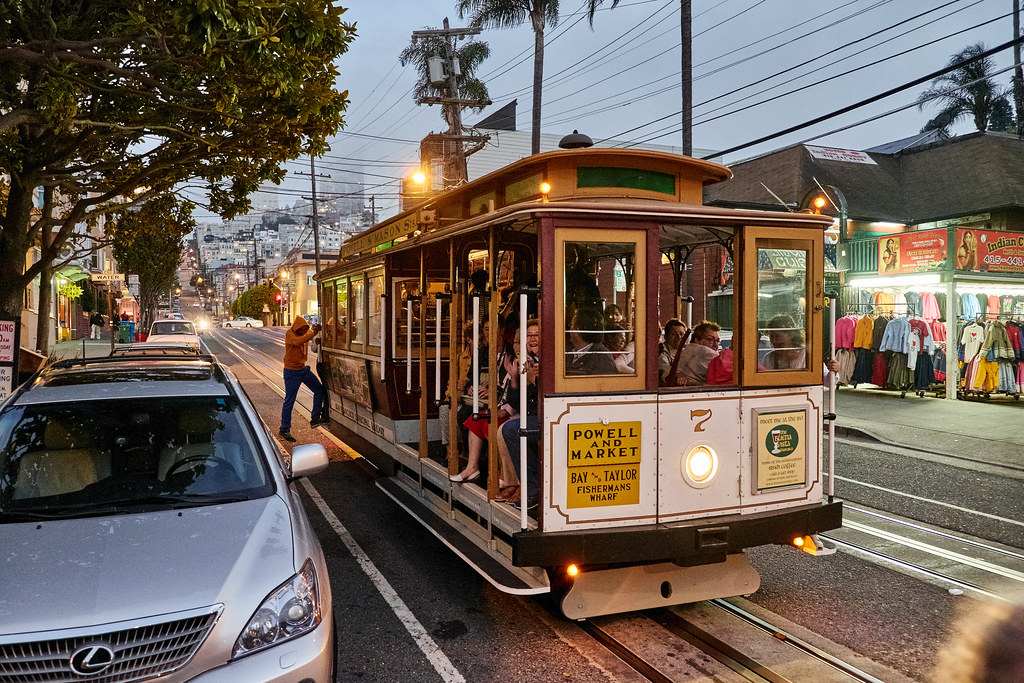 This isn’t so much a destination as it is a transport system but you’d be amiss not to spend an hour or two riding through the various cable cars that ebb and flow across the city. Neighbourhoods such as the Marina District, the Pacific Heights, with its Edwardian-style mansions and gardens, East Bay, Rockridge that’s built a clout for its boutiques and ethnic restaurants, and Walnut Creek, the theater hub of the city, are sure to be exciting stops in your cable car ride.

This 64m tower, in the city’s Pioneer Park, may not be the tallest building in the city but is definitely the one you need to climb in order to afford a luxurious and simply breathtaking view of the view. It also features incredible murals by its dimensions by artist Diego Rivera. It’s also very close to a dynamic seafood restaurant Sotto Mare Oysteria, where—you guessed it—they have the best oysters and scallops in the city. 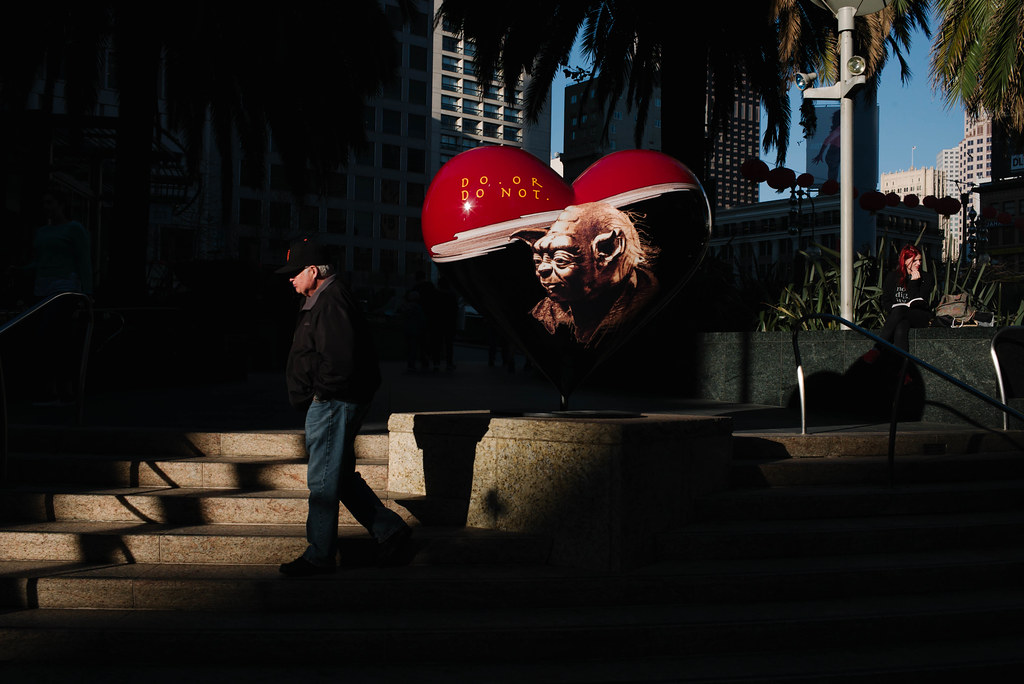 Rightfully known as the shopping square of the city, this market has it all: departmental scores, upscale boutique, niche sellers, bookshops, art galleries, gift shops, among others. It’s illuminated and flitting with people all day, 24 hours, attesting to its lively, all-inclusive character. There are also some wonderful buildings nearby, that are simply stunning to behold such as the Cathay Pacific, Tiffany and Co. Store. Grab your souvenirs from this place alone!

Hidden behind the waterfront, this small village-like neighbourhood of the city bears a resemblance to the quaint European villages, with their tiny houses, old-timey charm as well as narrow pathways that are reserved for wanderers alone. Check out the art galleries for some local pieces and there are a number of specialty shops in which you can scroll for items to be given to loved ones. 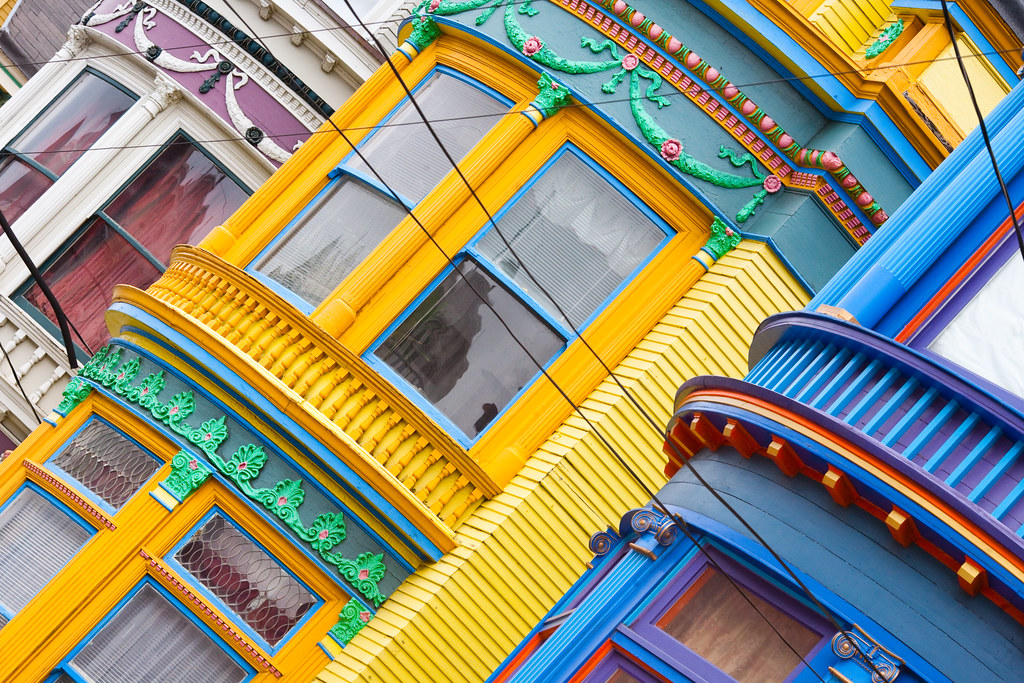 The nightlife mecca for not only California but in the United States, this area is fluttering with movement, manic and magic. Let’s go back to our history lesson of the Summer of Love, as this neighbourhood was the focal point of the hippie counter culture. That is why it is essential you finish off your stay in the wonderful city by learning about what makes it stand out. It is filled with relics of alternative lifestyles upon which this city and its principles were built. Have a delicious dinner at Cha Cha Cha where they serve authentic, fun Spanish food.