The Magic of Montreal

Known as the most European city situated outside of Europe itself, Montreal has amassed a reputation for standing out among the typical North American cities. Outside of its primary language of French, Montreal holds a distinct vibe felt by anyone who strolls through it. The multiculturalism, the graffiti on public spaces, exhibitions and art shows held at every street, the stunning nightlife, the niche bars and cafes all characterize the individual human heart of the city that takes precedent over the its commercial footing. With that in mind, I have arranged a basic itinerary of how best to entertain yourself in this lovely city.

The Canadian winters are freezing and Montreal hosts a multitude of summer festivals, so the months of May-June would be ideal, but be sure to book your hotels well in advance.

French, English. Most in the city are bilingual and eager to help you out so do not let language be a barrier!

The best way to explore the true charm of Montreal is by foot but since many of the attractions can be at a quite a distance from each other, it’s best to purchase 24-hour transport passes that will give you access to all the buses and metro routes. That being said, once you get off at Station Champ-de-Mars, you would prefer to cover those narrow, cobbled streets of Old Port by foot. Before you amble off to the port, you must explore China Town. Though it is a fact that China Town exists on any ordinary metropolitan, it is essential to traverse through one every city. It does not capture the essence of China regardless of its geographic measure but it also blends together the features of the host city with that of China. Treat yourself to a meal at one of the many restaurants, whether it be Cantonese, dim sum-special, Vietnamese Pho. You will also find to your liking many grocery stores that sell ingredients imported from China not available anywhere else in the city.

Walking up towards the port, you will surely not miss the grandeur of the Notre-Dame Basilica. Though it is nice to gaze at from the outside, its exquisite interior will astound you. Adorned with detailed wooden carvings, an azure ceiling enveloping the sanctuary from above, polychromatic colours layering through the decor and the stained glass windows portraying scenes from Montreal history, this church is designed in the style of what is called Gothic Revival. It also offers a light and sound show on its history every evening. 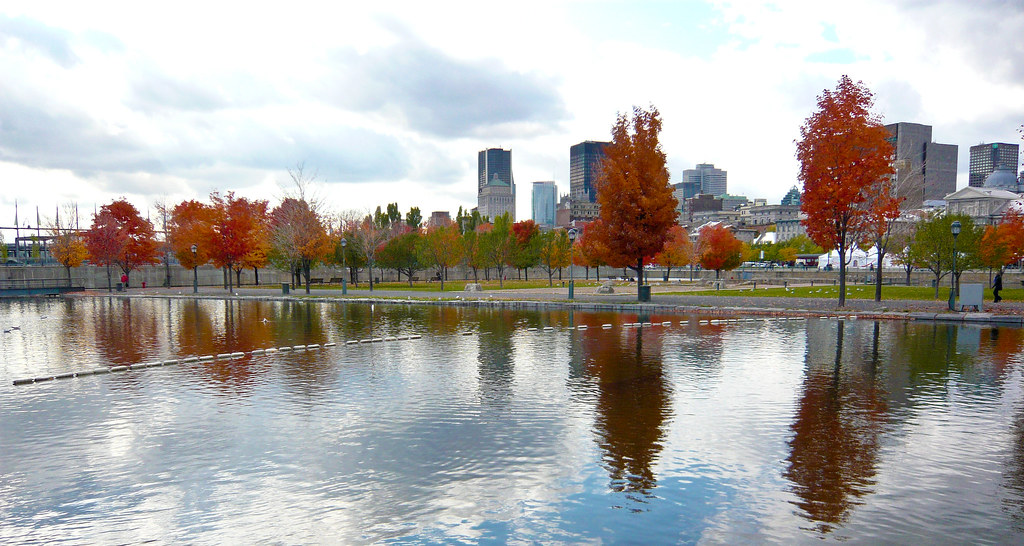 Following the church, you should take your time strolling through the alleys of Old Montreal. You’ll be able to explore its historical and artistic soul by hopping through its art galleries, souvenir shops and small museums based in its colonial houses. Sooner than you’d expect, you would be staring into the expanse of the Old Port and the Saint Lawrence River behind it. There are a range of ways you can experience the energy of the area: walking, cycling, rollerblading. There are numerous points of interest like the Montreal Science Centre, the headquarters of Cirque du Soleil, an urban beach, a mini amusement park that will cater to our entertainment.  If you’re lucky, you may happen upon the festivals that take place in this setting. For example, the events in roster for this summer are Orientalys Festival, StartupFest, Montreal International Reggae Festival, among others. Exit the port through Place Jacques-Cartier and enjoy a refreshing juice from the square whilst looking over the artwork laid out in shops. 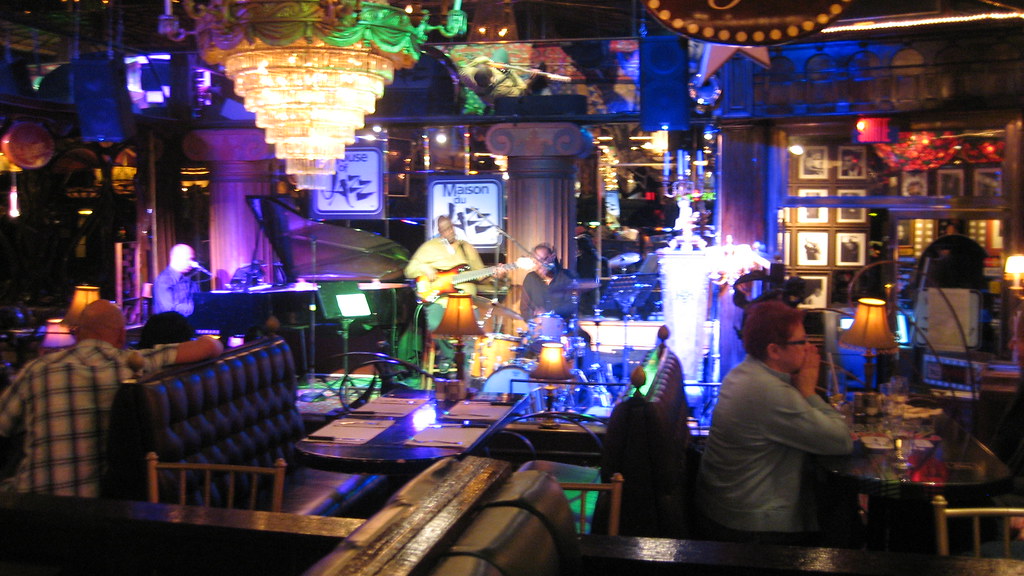 Renowned for its dazzling nightlife, Montreal has got lots of bars and pubs to offer to crowds seeking to have a good time with their friends. Along St. Denis Street, you will find a strip of restaurants, bars, clubs enthralling its patrons, if not with varied types of alcohol and food, then with its specific atmosphere that thrills the onlookers. Some exciting joints include Raldoph, a board-game pub, Le Saint Bock, a beer specialist with an outdoor setting and an impressive array of house brews and many other pubs, each offering something different. 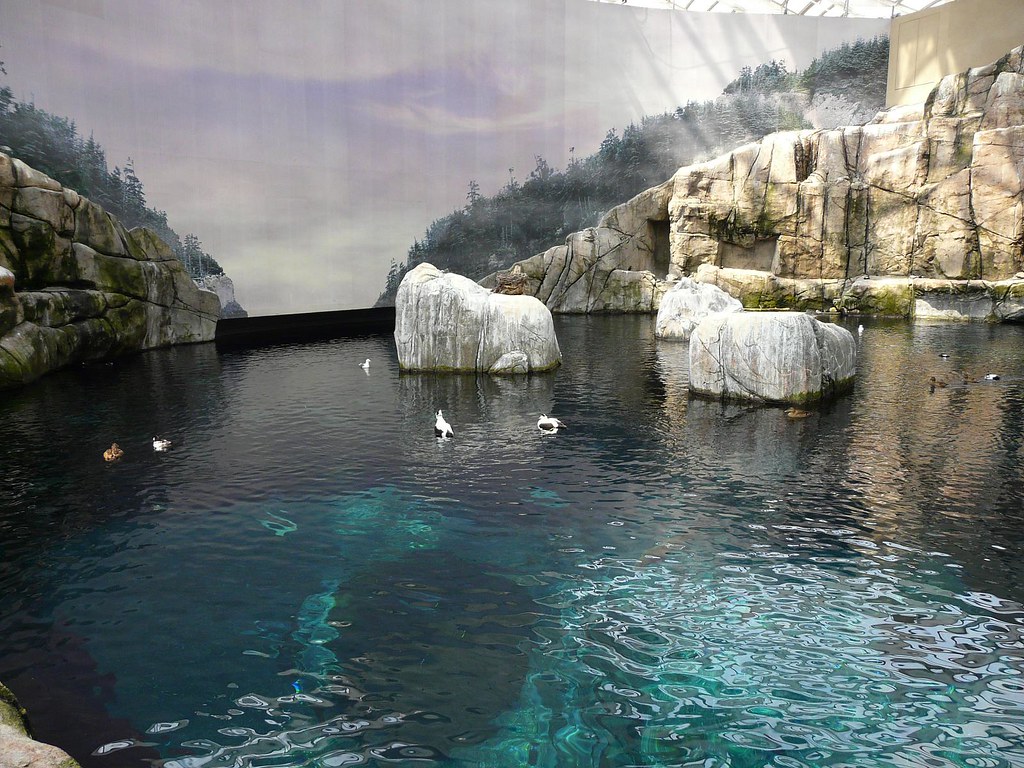 One of the many measures of the quality of life in a city is if it is capable of hosting the Olympics. The Olympic Park in Montreal is a testament to not only the Olympics and how they inspire the best in the hosting city but also the hard-working people of Montreal who created this park. To reach the area, you should take the metro to Pie IX Station. Though forty years old, the immensity of the Olympic Stadium still impresses. It is the tallest inclined structure in the world and is Canada’s largest stadium by seating capacity.  By going up a funicular, you can relish views of the city. Guided tours are also offered in the stadium. While in the other, do not fail to check out the Montreal Biodome. It has replicated five ecosystems found in the Americas and contains over 4500 animals from 250 different species. 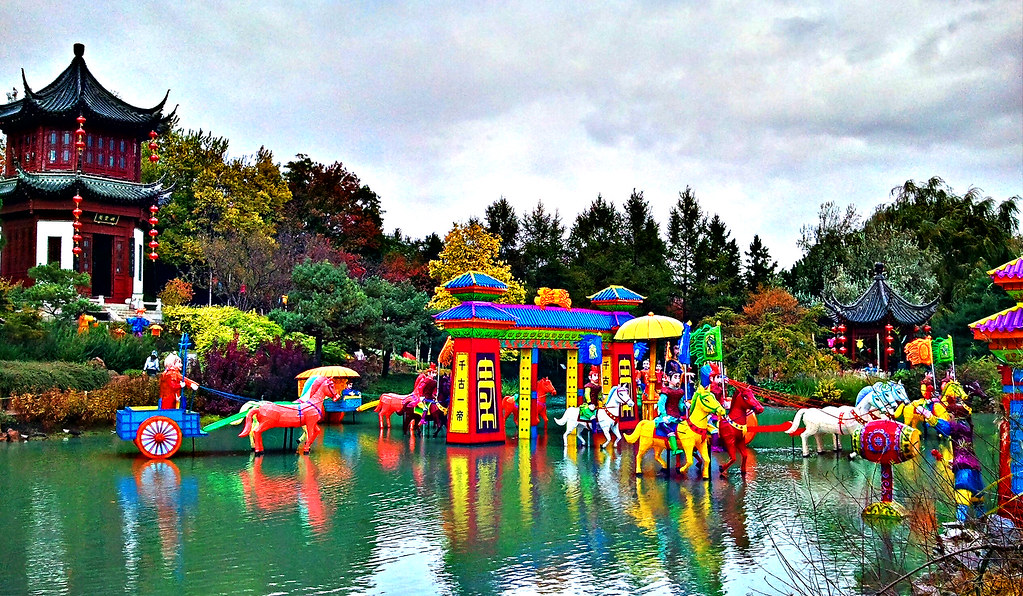 To continue your nature-oriented journey, venture into the Montreal Botanical Garden. You might think that there is nothing special about trees and plants when there are shinier, more essential activities to do but the sheer variety of flowers, shrubs, and plants stored inside these gardens make the effort more than worth it. The gardens, some styled and influenced by cultural elements such as the Chinese Garden, The Japanese Garden, First Nations gardens among others, have a lot of aesthetic appeal and once you are set on their path, it may be impossible to look away.

Once you’ve had your fill of nature, sit down for a meal at a restaurant near the Gardens, such as Restaurant Vieux Duluth, a casual joint from where you can get your share of modern Greek food or Beni Hana, if you are in the mood for popular Japanese food. 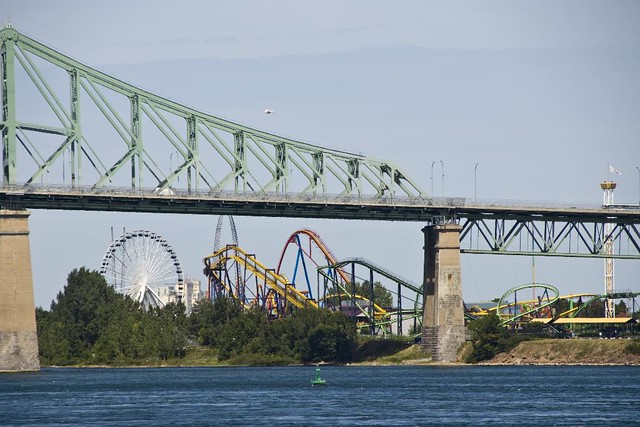 Spend the rest of your afternoon walking through the Jean- Talon Market, to which you can take the metro.  A farmer’s market in the Little Italy neighbourhood, it is adored by all the civilians as the oldest market in the city. It not only boasts a fresh produce of fruit and vegetable, but also a number of shops selling the best meats and cheeses in the city. Finish your day by riding back to Old Port and booking a ticket for the Croisières AML Evening Cruise along the Saint Lawrence River. It will take you under the Jacques Cartier Bridge as well as some islands in the river. To add to your experience, there is an on-boat DJ to pump you up during the ride!

The highlight of your third day should be an evening trip to the city’s namesake, Mount Royal, the three-peaked hill sprawled in the middle of city but before you make that trip, you should get a few things wrapped up as the climb up the hill and the view it presents is truly worth the wait. In the morning, take the metro to Côte-des-Neiges and a walk of fifteen minutes should take you to the Saint Joseph’s Oratory. It is the largest church in Canada and reached the top would provide you with an amazing view of the city. After you’ve spent sufficient time at the church, go to Rue Catherine, the primary shopping street of Montreal. Admittedly the shops are upscale and quite expensive but it never hurts to look around! Besides, walking along it will familiarize you with some of the most popular restaurants in the area as well as the Gay Village of Montreal. 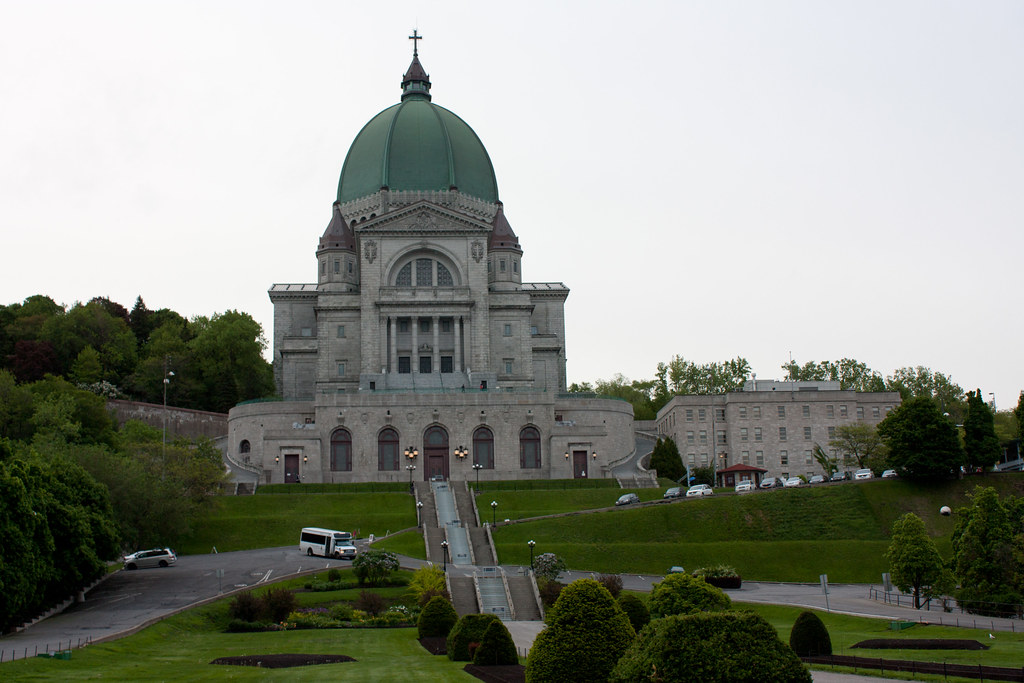 For lunch, I’d recommend a meal at La Banquise. It is the most famous diner that serves poutine, Quebec’s heritage dish: fries, cheese with sweet gravy. This diner remains open 24 hours and offers the most diverse, hefty options of poutine combinations. There is also a nice park across the street if you wish to jog off those calories or simply recline by the sun.  The next portion of your day should be spent by the streets surround McGill University, one of the oldest universities in Canada. You might not be a student but gazing at the classic architecture of its buildings and being surrounded by the hippest crowd of students will surely amuse you. 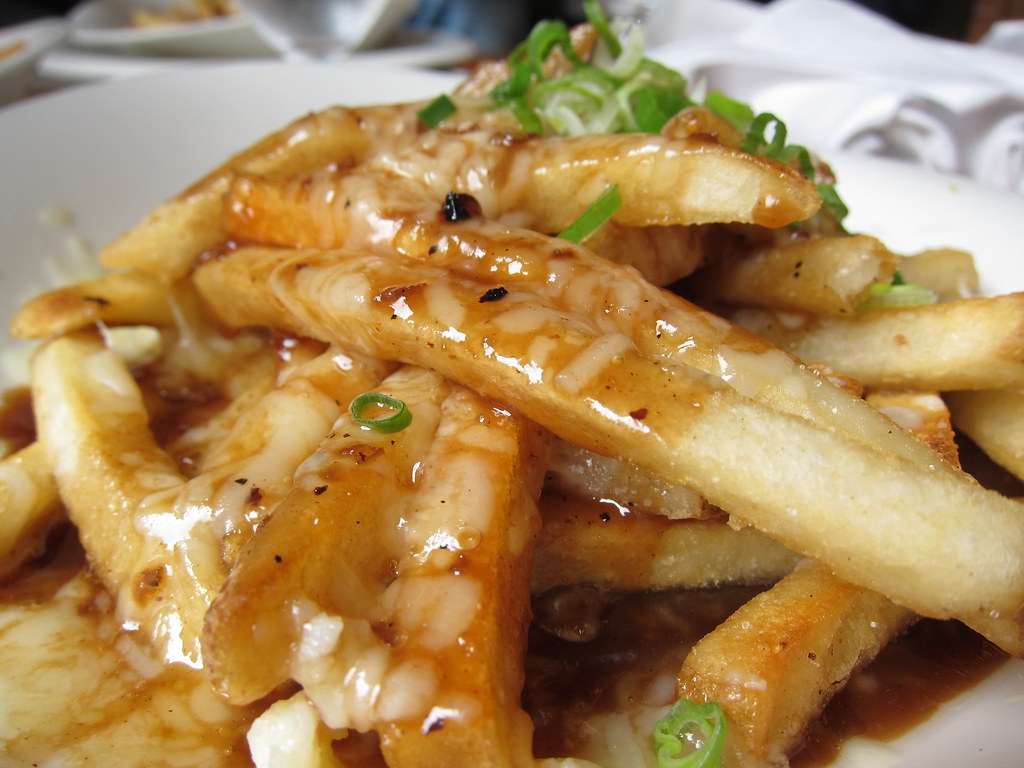 The university also serves as a gate post to the entrance of Mount Royal. Save the best for last you say! Pack yourself some food and drink before you begin your climb. There are two routes: the quick, steep staircase that will carry you to the top in less than ten minutes or the long, winding scenic route meandering through parks, slopes and gardens that will amount to 30-40 minutes, more if you stop by any of the fresh parks in your way. Once you get to the top, the view is bracing. The whole city, along with its skyscrapers and apartments stares up at you. If the sun sets around this time, you’re lucky as you will get to see the city illuminate itself in the course.