Known for its artistic heritage, elaborate canal system and narrow houses with gabled facades carrying legacies of the city’s 17th-century Golden Age, Amsterdam is undoubtedly one of the greatest tiny little cities in the world. Amsterdam is a city that rewards travellers who puts down the guide book, pins the stores and starts exploring. The most romantic and one of the most beautiful cities of the world, Amsterdam is widely known for its churches, museums and canal cruises. While Van Gogh Museum, Museum Van Loon and Rijksmuseum are known to one and all, there are many other rich places that will leave you bewildered. The spectacular city itself is enough to steal your heart away as you cruise along the serene  and picturesque Amstel River.

We are more excited about your trip than you are and we have planned a three days itinerary for your trip to Amsterdam to help you enjoy the city to the fullest. Take a look. This is the perfect place to begin your trip in Amsterdam. Completed in 1889, it exemplifies gorgeous Gothic architecture of Amsterdam and you can easily take a train here from the airport to begin your Amsterdam adventure that will take you right to the center of the town. A Dutch national museum dedicated to arts and history in Amsterdam, Rijksmuseum has a great collection of paintings from the Dutch Golden Age. Located at the Museum Square in the borough Amsterdam South, the museum is close to the Van Gogh Museum, the Stedelijk Museum Amsterdam, and the Concertgebouw making it convenient for you to explore other famous sites as well.

The museum has on display a crazy number of 8,000 objects of art and history, from their total collection of 1 million objects from the years 1200–2000, among which are some masterpieces by Rembrandt, Frans Hals, and Johannes Vermeer. There is a small Asian collection in the museum as well which is on display in the Asian pavilion.

Timings: Everyday 9AM to 5 PM 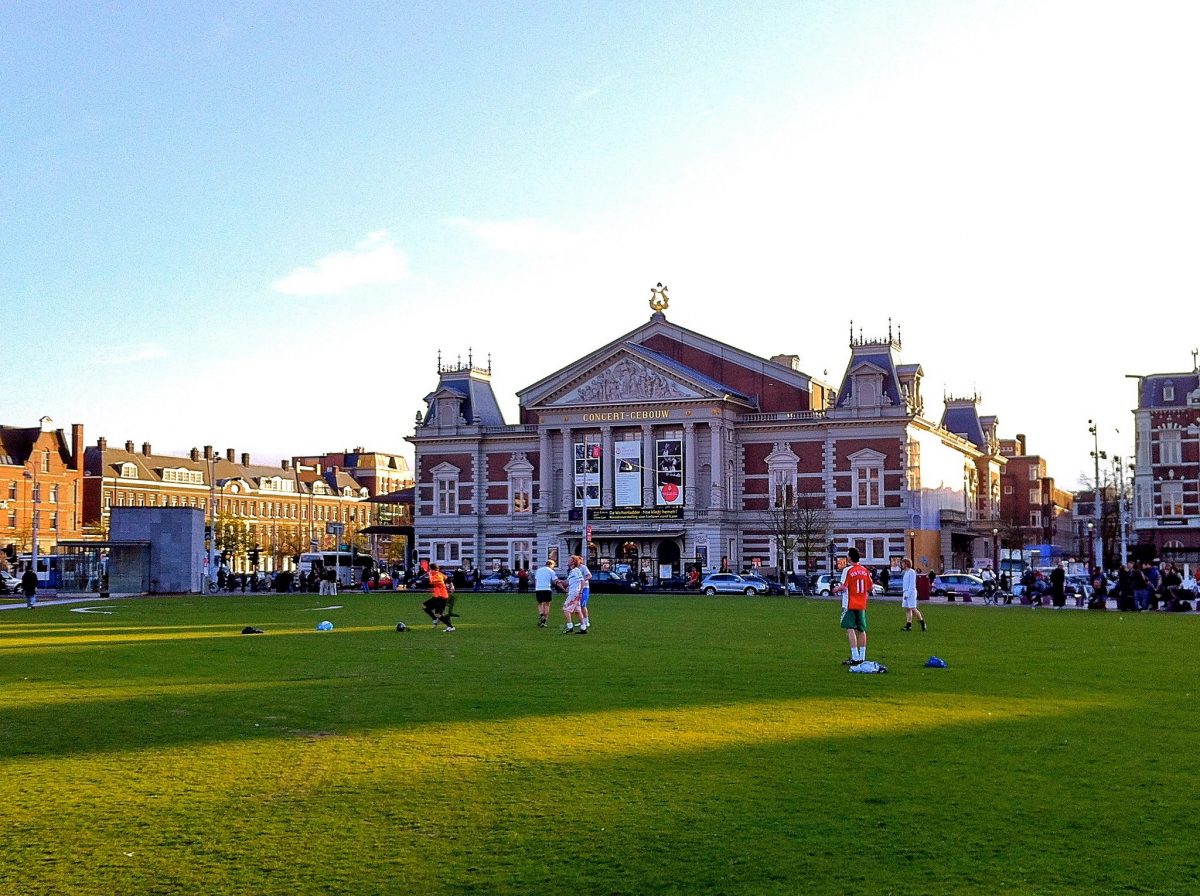 A concert hall in Amsterdam, The Royal Concertgebouw is truly one of the most exclusive concert halls in the world. Opened in 1881, the hall was praised by Bernard Haitink as the best instrument of the orchestra that it houses. The neoclassical architecture holds you tight and the soul-soothing orchestra sets you free. Not only this, but there is a cafe in there and you can also dine in the mirror hall as well besides enjoying great performances from international musicians.

It is a sheer royal experience which you cannot miss when you are in Amsterdam. Visit the monument in the evening to see the majestic hall glowing with colorful lights to capture some outstanding shots.

Most like New York’s Central Park, sprawling across 47 hectares, Vondelpark is a beautiful for place enjoying a sunny day, dog-walking, jogging, roller-skating, listening to music, people-watching, or just lazing about on the grass. The park was opened in 1865 and originally named the “Nieuwe Park” but later renamed to “Vondelpark”, after the 17th-century playwright and poet, Joost van den Vondel.

The park has an open air theater and you can spot many people riding their bikes and relaxing. Statue of the poet Vondel, the cast iron music dome, the Groot Melkhuis with playground for children, and the historical Pavilion with its restaurant Vertigo are among the popular attractions. 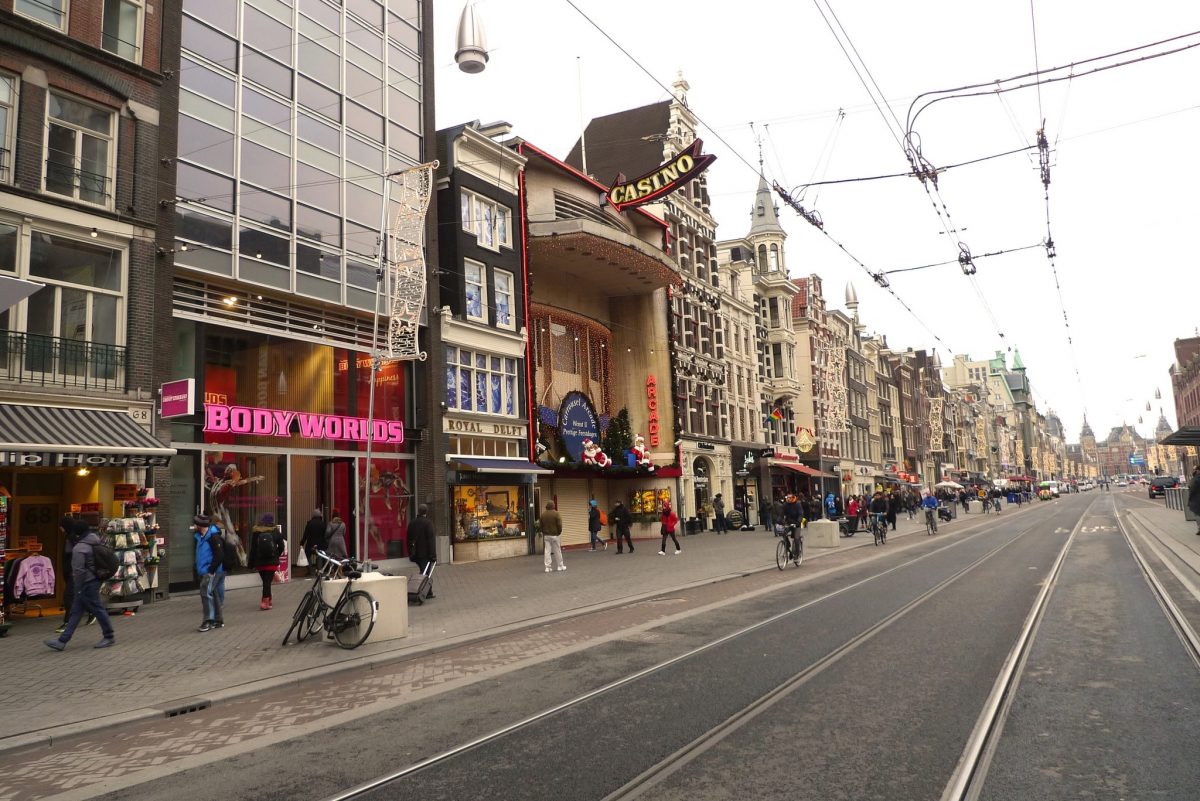 Amsterdam’s canals have been awarded UNESCO’s World Heritage status and the tour gives you an opportunity to explore why! The most relaxing and fun way to see the city highlights, the canal cruise tour is a great 70-90 mins experience which will become a memory forever. The best time to take a cruise tour is during sundown to explore a beautifully lit Amsterdam. Also, it is one of the best ways to see a lot of Amsterdam in a short time! Amsterdam adventure is incomplete without visiting one of the chic coffee shops that offers nice styles and vibes! If you are the Bob Marley guy, you would probably want to choose your type of marijuana from a quirky menu of selections. Pick a beverage along and get ready to shoot some pool, have some work done online or just relax with your friends.

Amsterdam: A City That Never Runs Out of Style! An the sun sets, dance the night away at the famous nightlife hub of the city at Leidseplein square, where streets are always on the roll with performers, restaurants are always packed, concerts and music are are always on, and nights are forever young! Coster Diamonds is one of the oldest still operating diamond polishing factories in Amsterdam where you get a chance to learn about diamond cutting and to admire a huge collection of diamond jewellery. Free-guided tours are available in more than 25 languages to help you explore and experience the mystical world of diamonds.

They were responsible for the creation of a few historical masterpieces, like the re-polishing of the Koh i Noor, mounted in the Crown of Queen Mary, to be admired in the Tower of London, amongst the other Crown Jewels of the United Kingdom and the Dresden Green Diamond, which belongs to the Saxon dynasty.

An art museum in Amsterdam, Van Gogh Museum is dedicated to the most appreciated and one of the most popular artists of the world. Vincent Van Gogh is the man behind the paintings like The Starry Night, The Potato Eaters, Irises and many other beautiful paintings which the world carefully preserves and admires among other most celebrated works. The museum has the largest collection of Van Gogh’s paintings and drawings in the world with over 200 paintings on display. It is a great place to visit especially for art lovers and children who have an inclination towards the same. Bloemenmarket is the world’s only floating flower market and it includes 15 florists and garden shops as well as a range of souvenir gifts. The flower stalls stand on the houseboats with all sorts of tulips, lilies and other colorful flower. This is one of the most fragrant places in the city and perhaps the most colorful too. Museum Van Loon is an impressive patrician house located alongside the Keizersgracht in Amsterdam. It is your chance to get a glimpse of the life of Van Loon family who still possesses the house but decided to open some parts of it for public. The beautiful garden, restored period rooms and impressive exhibition in the beautiful canal house make it worth a visit.

Snack pangs? Grab anything with Dutch cheese on it, you just won’t regret it! The serene Amstel river runs through the Amsterdam city lined with landmark buildings, stately mansions and colorful houseboats. You can take a walk along the riverside and spot many popular sites like the regal Carré theatre, the post-modernist Stopera city hall and opera house, and the neo-baroque domes of the St Nicolas church, all face the river front. As the sun goes down and the lights are turned on, one can see the mesmerizing reflections of these buildings in the water.

Sail the Sea In Style On These Luxurious Cruises

Jordaan Neighbourhood is bordered by the Lijnbaansgracht canal to the west, the Prinsengracht to the east, the Brouwersgracht to the north and the Leidsegracht to the south. The place is renowned for tight community bonds, radical politics and a love for drink and over-the-top sing-a-longs. Jordan is all about cafes, art galleries, scenic outdoor markets and loads of fun!. Join the sing alongs, eat to your hearts delight and drink, drink and drink…! The national church of Netherlands, Nieuwe Kerk is the most gracious building in the city. Located on the popular Dam Square, next to the Royal Palace, it is a 15th century church that is no longer used for church services, but is used as an exhibition space. There is a museum store inside that sells books, post cards, church exhibitions, etc. The Royal Palace gives you an opportunity to admire the breathtaking interiors, beautiful sculpture and paintings. The Dutch style royal palace was built in city hall during the Dutch Golden Age in 17th century. For decades, De Nieuwe Kerk Amsterdam has been known for its high-profile exhibitions about art, photography, and inspiring individuals and cultures.

One of Amsterdam’s most impressive historical monuments, De Nieuwe Kerk is a place of inspiration, commemoration, and celebration in Dam Square, the heart of the city.

Snack pangs? Grab a plate of the Dutch favorite fried bitter balls made of beef and bread crumbs Oude Kerk literally means “old church” and this church is 800 years old. The church is known for its largest vaulted ceiling in Western Europe. The oldest building in the city was built in 1300 and was dedicated to St. Nicolas. The church now serves as a museum which is open for public everyday. De Wallen also known as Red Light District is known for its vibrant districts and colorful lanes. This is the largest and the best known red-light district in Amsterdam and consists of a network of alleys containing approximately three hundred one-room cabins. Illuminated with red lights, the area looks different from the rest of Amsterdam.

And with this, ends your three days trip to the beautiful city, but I am pretty sure that you have not had enough yet. So, stay, explore and uncover!

Ride Along! Most Loved Cycling Routes In India
August 18, 2017